Everyone needs a reality check sometimes

The first time I saw a homeless encampment in person was in March 2020, at the very beginning of the coronavirus pandemic, and I remember thinking to myself: “how do people survive under these conditions?” Initially, I was afraid to get out of my car, caught up in the media’s portrayal that people who experience homelessness are dangerous or dysfunctional. Luckily, by talking to people experiencing homelessness themselves and hearing their stories, I have since been able to correct my initial biases. But this is not the case for everyone, many of whom have misconceptions of encampments as spaces that are inherently threatening, unsanitary, in need of supervision, and, ultimately, warranting destruction.

Homeless encampments are defined as an outdoor location with a visible structure that can take many forms, such as tents, shanties, or shacks,  where two or more individuals live.

Historically, people trying to dismantle encampments have positioned them as an ‘improper use of infrastructure’ and move people who are homeless along. Encampments are characterized as ‘aesthetically unpleasant’ and as bad for the local economy. Due to the negative rhetoric surrounding encampments, they are often subjected to mass surveillance by various law enforcement agencies, such as by-law, private security, and police.

Some members of the public see the existence of encampments as a significant physical threat to the city as a whole due to the negative connotation that surrounds them. These negative attitudes often result in sweeps, which are the closing of tent cities and the forceful transfer of personal property into police or city custody. Additionally, some municipalities seek out court injunctions to mandate the destruction of encampments and the forced eviction of tenants. These tactics are often justified by claiming that encampments are not houses as they are not sanctioned by the city, do not have proper sanitation facilities, are fire hazards, and are not connected to the electrical grid.

A place of sanctuary

While often vilified by anti-homeless groups, the media, and some members of the public, many people who stay in encampments report that they prefer it to staying in shelters or alone on the street and that they have multiple benefits, such as safety and stability.

While some people assume that encampments are lawless and that their inhabitants are inherently violent, this is not the case. In fact, many encampments provide ample security measures for residents, including  24-hour surveillance, and camp rules that prohibit violence.

For many people, living on the streets leaves them vulnerable to victimization, especially if they are disabled, mentally ill, or use substances. In fact, over a 13 year period, the National Coalition for the Homeless reported that 1,437 individuals experiencing homelessness were the victims of a violent crime. Living in an encampment can provide a sense of security away from the judging eyes of law enforcement and community members and provide protection from people who may inflict violence.

For people who have couch surfed or shelter hopped, encampments can provide a sense of stability. Encampments also provide 24/7 access to one’s belongings and bed, unlike many shelters that operate on a twelve-hour schedule. This can be especially problematic for people who work night shifts and need to rest during the day. It tentatively also allows individuals to store their belongings during the day so that they do not have to carry them around to appointments, when accessing services, or to job interviews. Having constant access to their belongings also provides important feelings of autonomy and independence. However, encampment residents also face the constant risk of their stuff being considered ‘abandoned’ by law enforcement and confiscated if left unattended for even short periods of time.

A little bit of compassion can go a long way

Regular encampment sweeps and the threat of eviction are costly practices that have a detrimental effect on various aspects of resident’s lives, including their physical, mental, and emotional wellbeing. Sweeps mean that inhabitants can have their tents and property confiscated by law enforcement or demolition companies. It is tremendously difficult for people to retrieve their belongings and they are sometimes destroyed. For example, a study conducted in Hawaii found that 47% of inhabitants lost their personal identification during sweeps, 43% lost clothing, 40% lost tents, 24% lost food, and 21% lost medicine.

It is due to the harmful effects of sweeps and evictions that I encourage municipalities to embrace encampments as a temporary solution to the housing crisis during the COVID-19 pandemic while continuing to focus on rapid rehousing and investing in long-term truly affordable housing. Individuals experiencing homelessness need to be recognized as holders of fundamental rights who are to be consulted prior to making decisions that affect them.

Lastly, the eviction and relocation of encampments should be restricted. In the case that an encampment must be dismantled, residents should be given adequate notice, as well as access to services that will assist them in their relocation. Additionally, relocations should only be used as a means of last resort when the location of an encampment poses a direct threat to either the inhabitants or the community. If this option is evoked, all encampment residents should have the choice of where they live and be sure that it is a safe place that has adequate shade, space, and sanitation facilities, and is close to essential services such as food services, health care centers; harm reduction supports; and employment services. 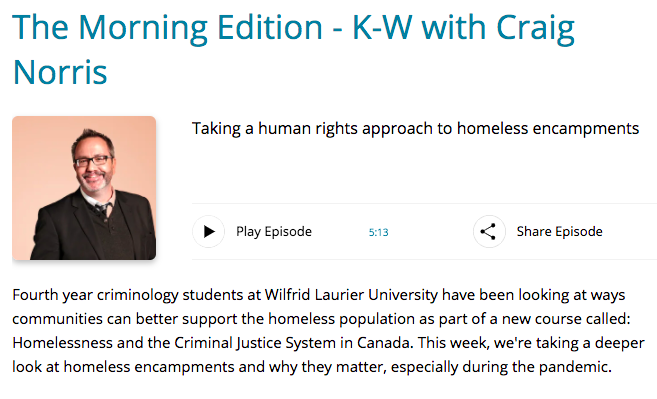 LISTEN TO THE CBC RADIO INTERVIEW