The minority Liberal government voters elected on October 6 provides a political opportunity for Ontario to realize a long-overdue and much-needed four-point affordable housing plan. The province’s last two minority governments delivered robust housing initiatives: In 1975, the province’s first rent regulation and tenant protection laws, which grew more substantial and effective until they were significantly dismantled in 1998; and Ontario’s first major affordable housing programs in 1985, which were successfully increased until they were shut down in 1995.

The signs of Ontario’s province-wide housing distress are clear: one in every three Ontario renter households are in core housing need – the federal government’s definition of precarious housing. Approximately 1.3 million provincial households pay 30 percent or more of their income on housing, the official definition of unaffordable housing. There are more than 152,000 households on affordable housing waiting lists across Ontario. Housing is not only the single biggest expense in the monthly budget of low and moderate-income households, but the high cost of housing is one of the biggest factors driving people to food banks because they don’t have enough money to pay the rent, and cover other basics such as food, energy, transportation and child care. Housing is also one of the most important fundamentals for good health for individuals and for the entire population. However, federal and provincial investments in affordable housing are set to drop sharply this year, and continue to decline after 2014. 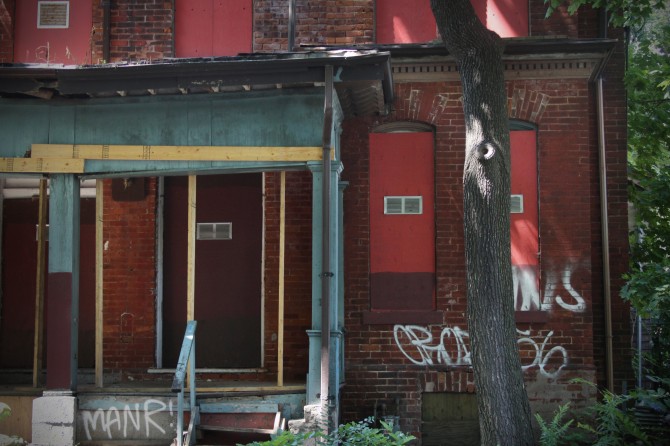 A four-point housing agenda for the new minority Ontario government would include the following:

New affordable homes: Most parts of Ontario urgently need more affordable homes to accommodate people that are homeless or in grossly substandard and over-crowded housing, and also to deal with population growth. A provincial inclusionary housing policy that authorizes municipalities to introduce planning rules that would require affordable housing in all new developments is one important measure, but it needs to be combined with a long-term affordable housing supply initiative that includes committed funding. In recent years, most affordable housing development dollars in Ontario have come from the federal government, with some of these dollars matched by the province. But the federal housing investments are eroding ($1.2 billion in housing cuts this year alone), and Ontario has no plan to deal with the federal withdrawal.

Affordability measures: A universal housing benefit that would help cover the gap between household income and housing costs is long overdue. The Ontario government has dabbled in various housing supplements over the years, but – as the auditor-general noted in 2009 – none have been particularly well designed. With conventional ownership housing increasingly out of reach for low, moderate and even middle-income households, and the federal government committed to tightening mortgage eligibility rules even more, the pressure is building on the province’s private rental and social housing stock. But vacancies are low, and rents are rising in private rental markets throughout the province.

Ending homelessness / linking with supports: Ontario is lagging behind other provinces, including Alberta, in making a commitment – and backing it with a solid plan and funding – to end homelessness. The province’s so-called long-term affordable housing strategy does contain some useful measures, including a commitment to work with municipalities to create more flexibility among a variety of disjointed provincial homelessness and housing programs, but a specific provincial plan with adequate funding is lacking. A key to preventing and ending homelessness is an effective strategy that links health and social supports with housing through a “housing first” approach – successfully used in a growing number of US and Canadian jurisdictions. Ontario’s supportive housing policies have not kept pace with innovative developments in Canada and internationally.

Reprinted with permission from the Wellesley Institute

Michael Shapcott is Director, Affordable Housing and Social Innovation at the Wellesley Institute, an independent, non-profit research and policy dedicated to advancing urban health. Michael has worked extensively in Toronto, in many parts of Canada, nationally and internationally on social innovation, the non-profit sector, civic engagement, housing and housing rights, poverty, social exclusion, urban health and health equity. He is recognized as one of Canada’s leading community-based housing and homelessness experts.