In Canada and around the world, many women, girls, and gender diverse people continue to live in insecure or unsafe housing due to inequity and discrimination. In the Canadian context, these groups experience disproportionate levels of core housing need and poverty. There is a severe lack of affordable and appropriate housing that meets the needs of diverse women and women-led families, exacerbated by systemic issues that keep this group trapped in poverty and struggling to obtain housing assistance. 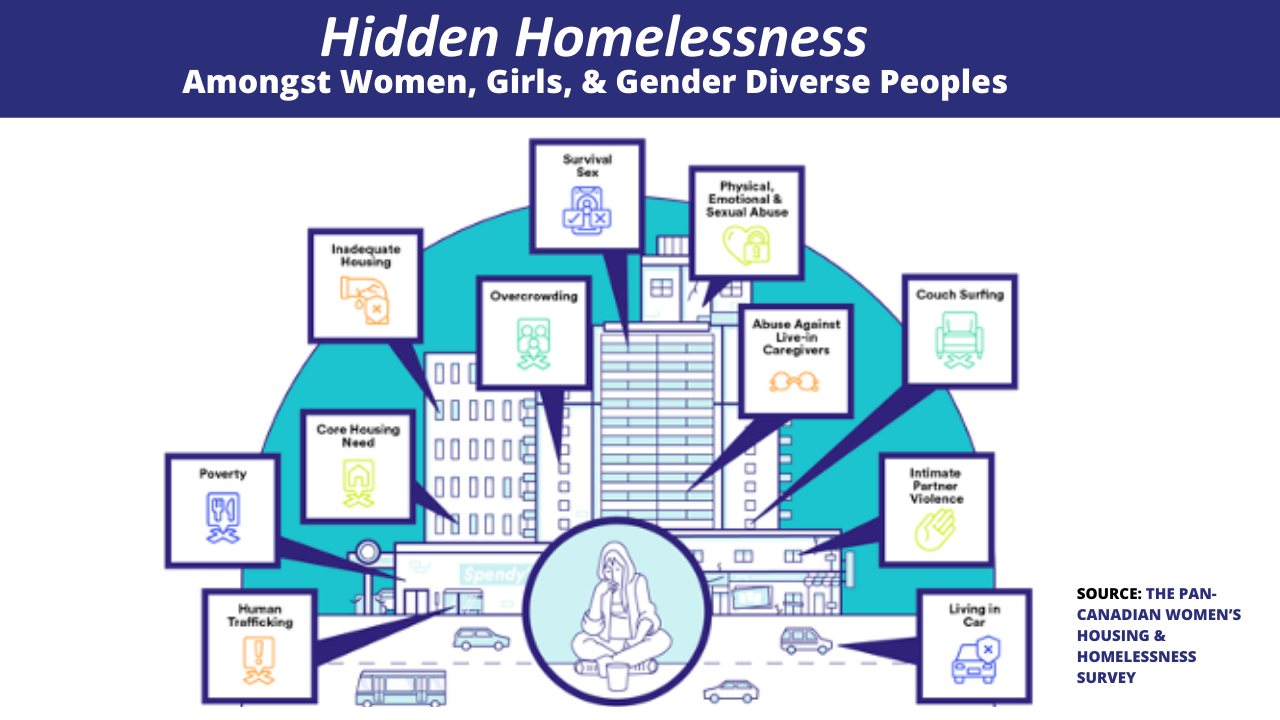 In the midst of few housing options and overwhelmed emergency shelters, many women and gender diverse people rely on informal networks for housing or engage in dangerous survival strategies to access shelter and meet their basic needs. The need to remain in situations of hidden homelessness not only places this group at risk of exploitation and abuse, but also renders their needs invisible to mainstream supports, systems, and policy development. In the wake of the housing and homelessness crisis facing women and gender diverse people across Canada, the Women’s National Housing and Homelessness Network (WNHHN) conducted an exhaustive scoping literature review on the causes and conditions of homelessness for women: The State of Women’s Housing Need & Homelessness in Canada.

Building on this research, today we release The Pan-Canadian Women’s Housing and Homelessness Survey. Completed by 500 diverse women and gender diverse people living in communities across the country, this research constitutes the largest national gender-specific survey on housing need and homelessness to date. This national portrait offers critical insight into the unique causes, conditions, and consequences of housing precarity and homelessness for women, girls, and gender diverse people. Developed in partnership with lived experts, service providers, human rights experts, and researchers, the survey explored the following key questions:

We identified 10 key findings that highlight the unique realities of housing need and homelessness amongst women, girls, and gender diverse people. Here are three important ones:

1. Experiencing a breakup was the primary reason that women and gender diverse people lost their most recent housing. This suggests that housing for this group is deeply dependent upon maintaining a personal relationship with a man, partner, or other person

The top reason women and gender diverse people lost their most recent housing was because of a breakup, with 47% reporting this experience. This reason outpaced all affordability issues, concerns about safety, experiences of violence, loss of income or subsidies, or poor housing conditions. It is evident that in Canada, security of tenure for this group is often under the control of a romantic or sexual partner (most frequently a man). An array of policies can be held responsible for this dependence, many of them rooted in colonial and patriarchal systems which dislocate particular women and gender diverse people as owners of property and land, fail to equitably compensate them for their labour, deny them access to mortgages, and create barriers to escaping violence or abuse. 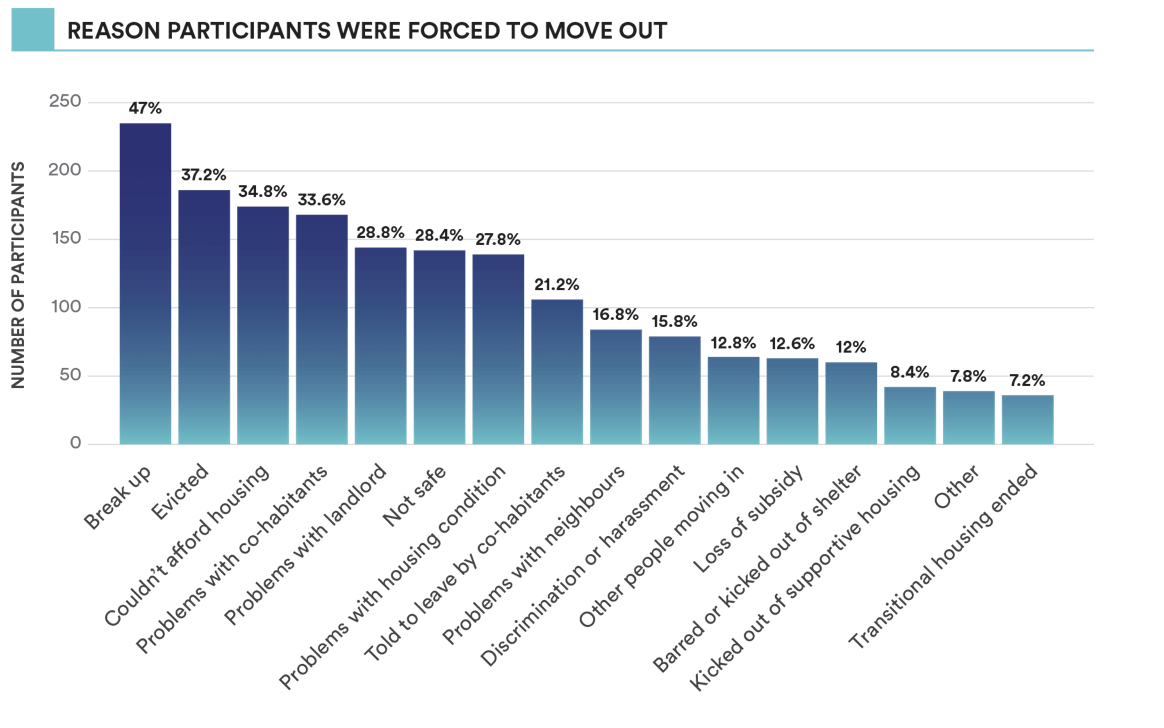 2. The chronicity and depth of poverty amongst women and gender diverse people was linked to the insufficiency of social assistance and poorly-paid jobs. In order to survive, most participants had to engage in additional strategies to generate income each month. In many cases this contributed to increased debt, with over a third using credit cards, borrowing money, skipping bills, or using money marts.

In their current or most recent place, women and gender diverse people had an average of $596.66 left over after paying for their housing. Many reported have $0 after paying for housing, and only 14.2% reported having enough money to cover their basic necessities after paying for housing. Many participants engaged in income-generating activities that increased their debt load. A total of 36.4% of participants used credit cards, borrowed money, skipped bills, or went to a money mart each month to afford basic necessities. The prevalence of dependence on exploitative money lending services, criminalized activities, and under-the-table jobs demonstrate that many women and gender diverse people risk exploitation just to afford basic necessities and remain housed.

3. 79% of women and gender diverse people experiencing housing need or homelessness report having a disability. This group reports significant inequities and discrimination on the basis of ability, with severe consequences for many.

These findings point to a persistent accessibility gap in housing stocks and shelters across Canada, significant affordability problems for many women and gender diverse people with disabilities, and a heightened risk of eviction. 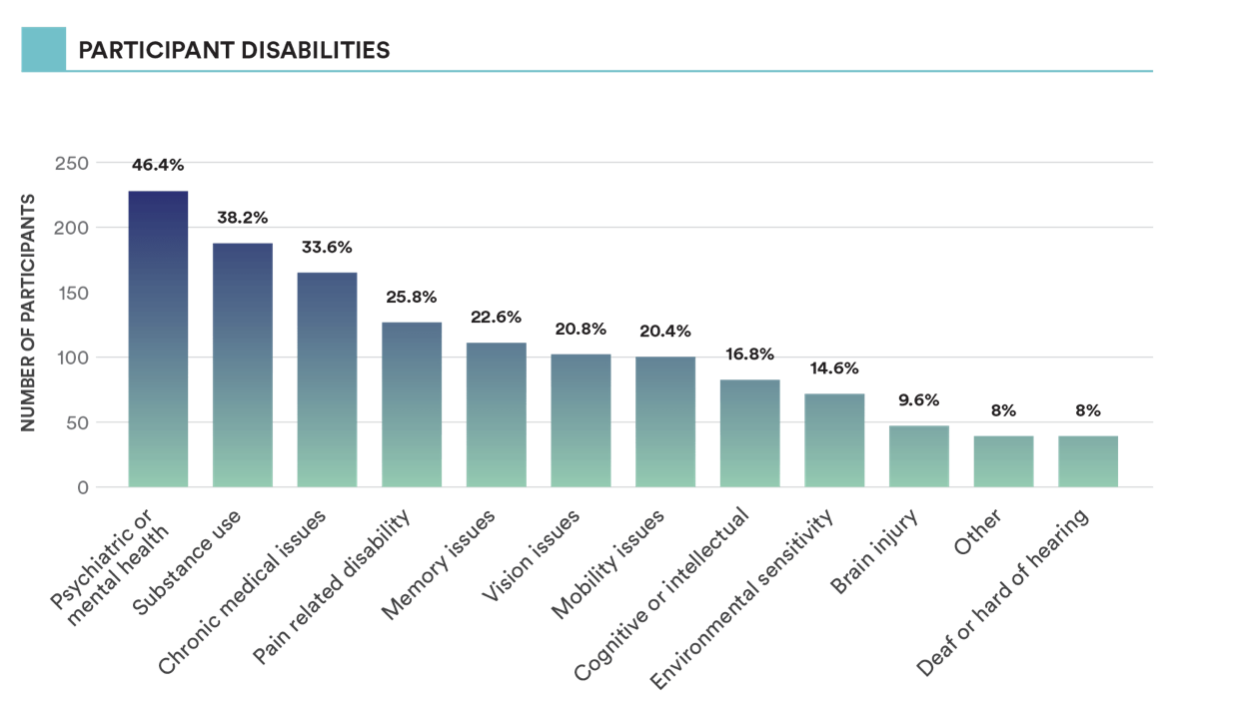 Where Do We Go from Here?

This survey illuminates why housing is not only a gendered issue but is an urgent human rights concern, including on the basis of equity and non-discrimination. Fortunately, the ratification of the National Housing Strategy Act (NHSA) in 2019 has the potential to transform our response to gender-based inequities within the Canadian housing system. The NHSA establishes housing as a human right in domestic legislation, recognizing “housing is essential to the inherent dignity and well-being of the person and to building sustainable and inclusive communities.”

This legislation, with its explicit commitment to improving housing outcomes for persons in greatest need, represents a tremendous step towards addressing the disproportionate levels of housing need and unique housing rights violations experienced by women, girls, and gender diverse people. We hope that the data and recommendations in The Pan-Canadian Women’s Housing and Homelessness Survey can help Canada move towards the progressive realization of the right to housing for women, girls, and gender diverse people.