We recently released the latest report in our series on the scale and severity of household food insecurity in Canada. After six PROOF reports, the story remains the same — food insecurity is a large problem that hasn’t gotten any better. This blog provides an overview of the findings highlighted in this report.

Drawing on data for 54,000 households from Statistics Canada’s Canadian Income Survey (CIS), our new report found that 15.9% of households in the ten provinces were food-insecure in 2021. That translates to 5.8 million people, including 1.4 million children, living in households with inadequate or insecure access to food, prior to this current period of record inflation.

Their experiences range from concerns about running out of food before there is enough money to buy more, to the inability to afford a balanced diet, to going hungry, missing meals, and in extreme cases, not eating for whole days because of a lack of money.

For these households, the record inflation since has likely made their situations even worse. If Federal and Provincial Governments don’t start taking bold policy action to ensure households have enough money to cover their basic needs, individuals and families who are already food-insecure will face more extreme compromises.

In 2021, over a quarter of food-insecure households were severely food-insecure. That amounts to 1.3 million Canadians living in households experiencing absolute food deprivation.

With the incomes of low-income households not keeping up with the unprecedented rise in costs of living, we can expect the prevalence of severe food insecurity to rise now. And with that, the physical and mental health problems associated with food insecurity will also worsen.

The CIS began collecting data about household food insecurity in 2019 as part of the Federal Poverty Reduction Strategy. Moderate and severe food insecurity was also added as an indicator of poverty on the Official Poverty Dashboard.

This was an important step forward because it ensured consistent measurement of household food insecurity, which was not always the case through the Canadian Community Health Survey (CCHS). It was also a start to recognizing food insecurity as an important dimension of poverty for public policy to attend to.

Unlike income-based measures of poverty, food insecurity tells us about households’ lived experiences and whether they can afford the food they need at the end of the day. It reflects a household’s broader material circumstances, considering the amount and stability of income, assets like property, and other resources a household could draw upon, as well as the cost of living.

It is also a marker of pervasive material deprivation — the struggles these households are facing are not limited to food. By the time a household appears in these statistics, they are also likely compromising spending on other necessities, including housing and prescription medications.

This report is our first using data from CIS to update Canadians on the scale and severity of household food insecurity in Canada. After six PROOF reports, the story remains the same — food insecurity is a large problem that hasn’t gotten any better.

We can’t continue ignoring this problem because it is extremely harmful to people’s health and costly to our healthcare systems. 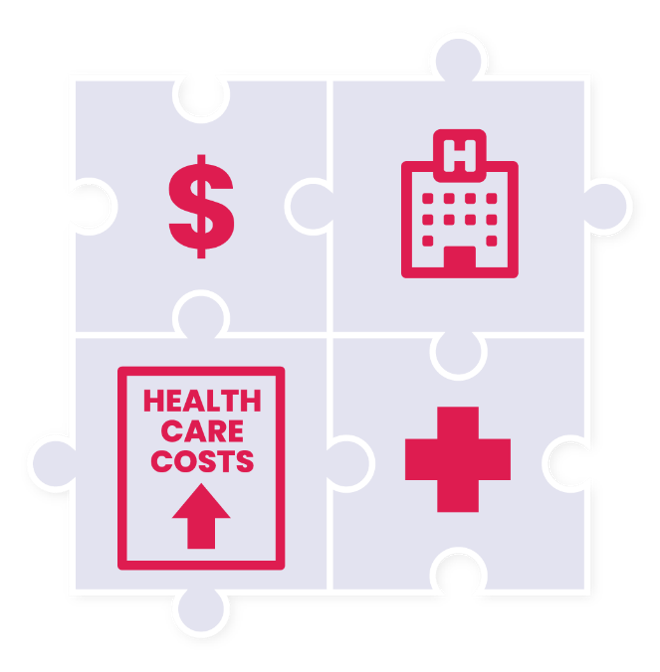 People’s health and wellbeing are tightly linked to their household food security status — from chronic physical and mental health problems to infectious diseases to premature mortality. We know people living in food-insecure households are more likely to be hospitalized, stay in acute care for longer, require mental health care services, and incur greater healthcare costs. We also know that the risk of these negative health outcomes increases with the severity of food insecurity.

At its core, food insecurity is about insufficient financial resources for meeting basic needs.

As it stands, the programs that make up our social safety net appear to be part of the problem, rather than part of the solution. While strong evidence suggests that public old-age pensions protect most Canadian seniors from food insecurity, reliance on other public income support programs means a high probability of food insecurity.

We also can’t lose sight of the fact that half of the households who were food insecure relied on wages, salaries, and self-employment. Too many households are unable to make ends meet through employment, and our social safety net is unable to protect those in need. 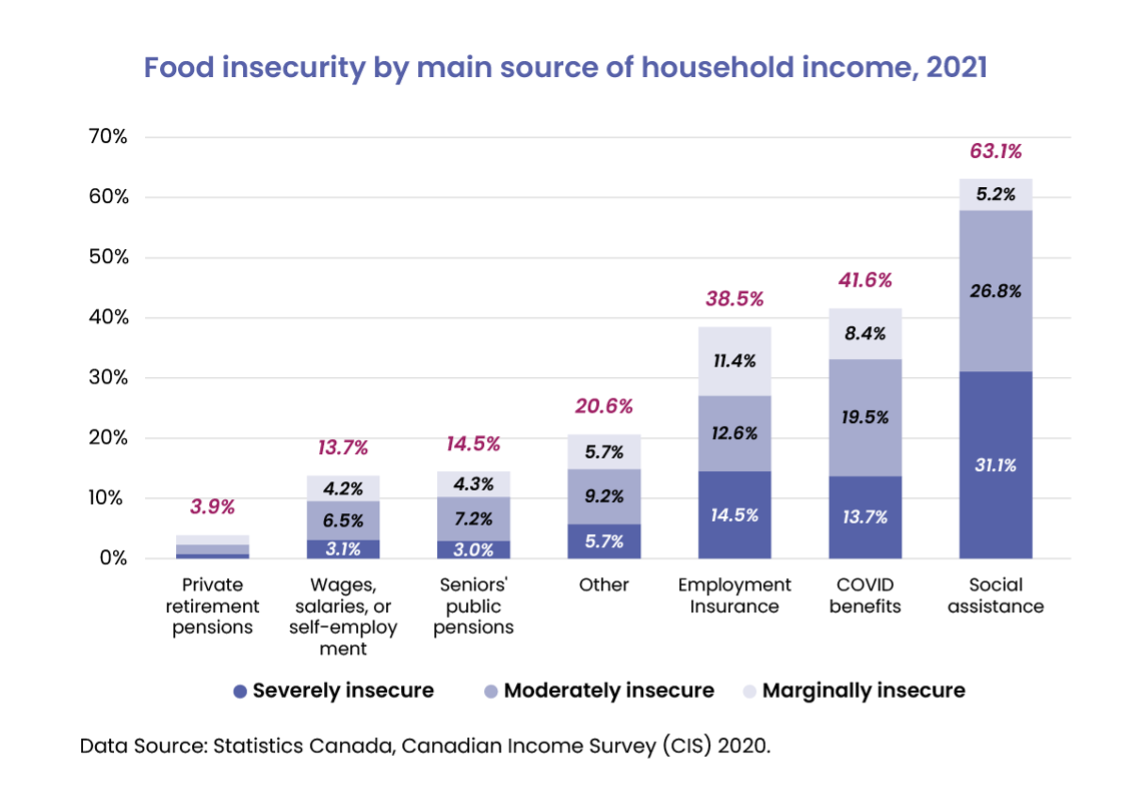 The persistently high rates of food insecurity are a shameful indictment of our approach to poverty alleviation. It’s time for Federal and Provincial Governments to pay attention to the rates of food insecurity in Canada and the large body of evidence showing that this problem can be addressed through policy interventions that improve the incomes of low-income households.

Federally, we have policies meant to reduce poverty, like the Canada Child Benefit, that clearly need to go further to support the lowest-income households. In 2021, 1 in 5 children lived in a food-insecure household. Targeting this benefit and other similar benefits to provide more money to vulnerable households is needed to impact the rate of food insecurity. 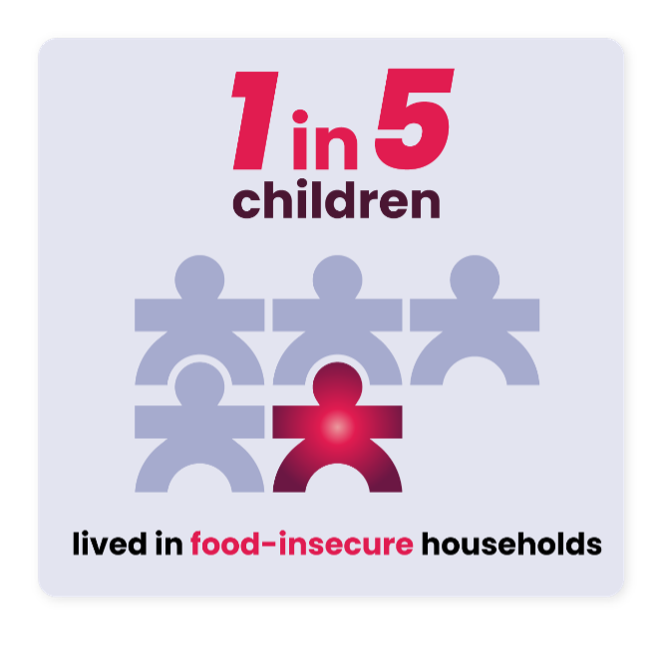 Provincially, policies like minimum wage, social assistance, income taxes for low-income households, child benefits and other income supports matter. The differences in the rates of household food insecurity across the provinces point to the critical role that the Provincial Government plays. 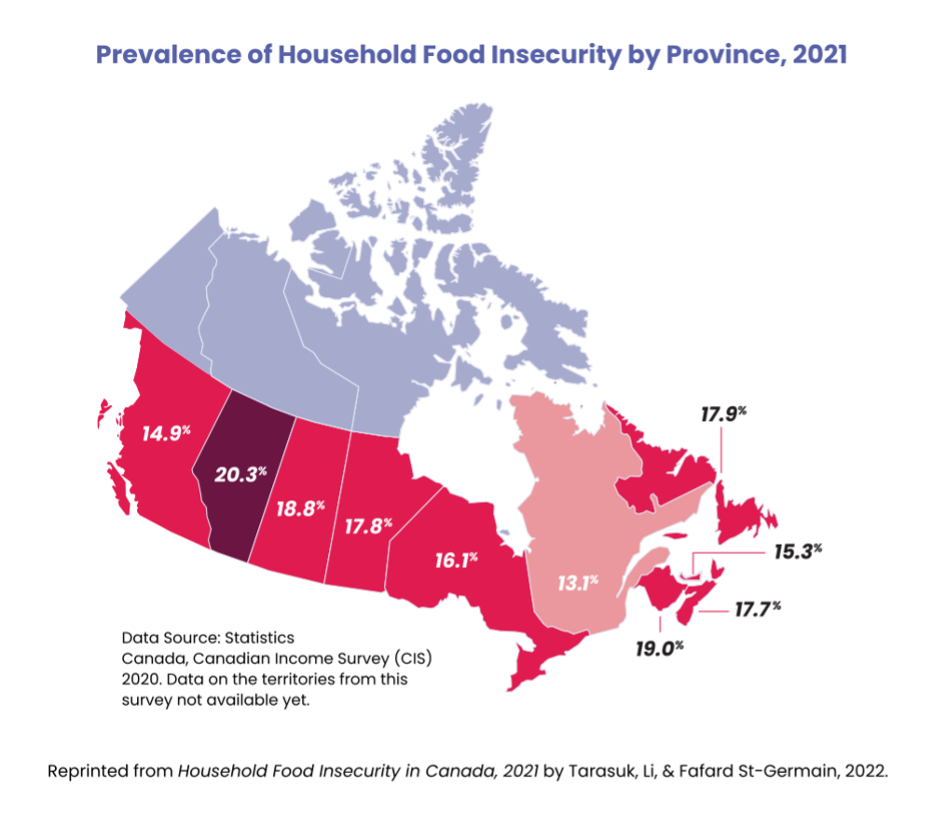 Quebec’s prevalence of food insecurity in 2021 (13.1%) was about two-thirds that of Alberta’s (20.3%). Their prevalence of severe food insecurity (2.8%) was less than half of that of Alberta’s (6.3%). More research is needed to pinpoint the provincial policies that are driving this difference, but it is noteworthy that Quebec is the only province to have been indexing both its social assistance program and income benefits to inflation and that its child benefit is higher than that in any other province.

While data collected in the territories in 2021 is not available yet, previously documented rates of food insecurity were extraordinarily high, especially in Nunavut. According to the data, 46.1% of people in Nunavut lived in moderately or severely food-insecure households. Reducing food insecurity in the North must be a national priority.

The evidence is clear: the only way to protect Canadians from household food insecurity and the health problems associated with it is through policies that ensure all low-income households have enough money for food and other basic needs, regardless of their income source.

That means establishing an income floor that no one will fall below, whether through a Basic Income or major reforms to the social safety net and wage-setting policies that have let working-aged Canadians and their families fall through the cracks for so long.

This report comes at a critical time, with the cost of living becoming increasingly out of reach for low-income Canadians. Right now, it is more important than ever for Provincial and Federal Governments to look at their policies and how they can be better designed to mitigate the impact of inflation and reduce the rate of food insecurity.

Read our story in the Temerty Faculty of Medicine News.