Last week I was in Whitehorse where I released a peer-reviewed policy report on poverty in Yukon. The report was part of the much larger Social Economy Research Network of Northern Canada project.

Report findings include the following:

- Ignoring poverty can be quite costly, as has been clearly demonstrated by research on the ‘costs of poverty’ done by economist Nathan Laurie and others, including PEF Blogger Iglika Ivanova . This is due largely to lost productivity and higher health care costs associated with poverty.

- As can be seen in the table below, most Canadian jurisdictions have implemented a “poverty reduction strategy” at some point in the past decade. 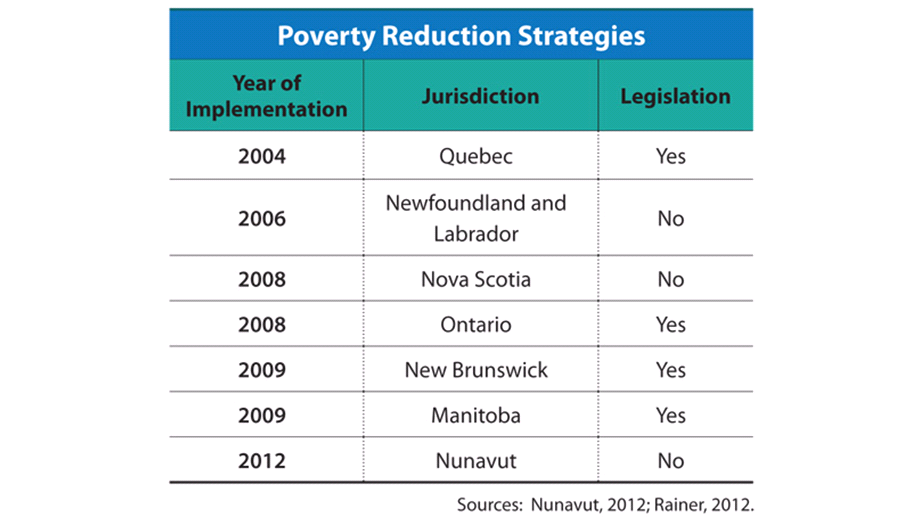 -Yukon does not yet have a "poverty reduction strategy."

-Yukon's rate of food insecurity amongst social assistance (SA) recipients — as measured by the Canadian Community Health Survey — is significantly higher than for SA recipients in the rest of Canada. This is almost certainly due to the higher costs of food in Canada's North. This is cause for concern, especially since poor nutrition predisposes individuals to multiple health problems, including hypertension, diabetes and certain forms of cancer.

-The housing market in Whitehorse (which accounts for three-quarters of Yukon's population) is a very challenging place to be trying to find affordable housing. The average price of a house in Whitehorse has increased by 80% in the past six years (even after adjusting for inflation). And as of March 2012, the rental vacancy rate in Whitehorse was just 1.3% (yet, a 'healthy vacancy rate' is generally believed to be in the 3-4 % range).

-Federal funding for social housing (on long-term operating agreements) is running out. Most already-existing social housing units in Yukon currently depend on federal funding for their operation and maintenance; this includes the cost of fuel, power and water. As the federal contributions start to run out (see figure below), this will leave much of Yukon's stock of social housing in a very vulnerable position. (Every Canadian jurisdiction is facing this challenge, and Steve Pomeroy does a very good job of writing about the national picture here . But Canada's North, where housing is much more expensive, is especially vulnerable on this issue, and I've previously written about that here .) 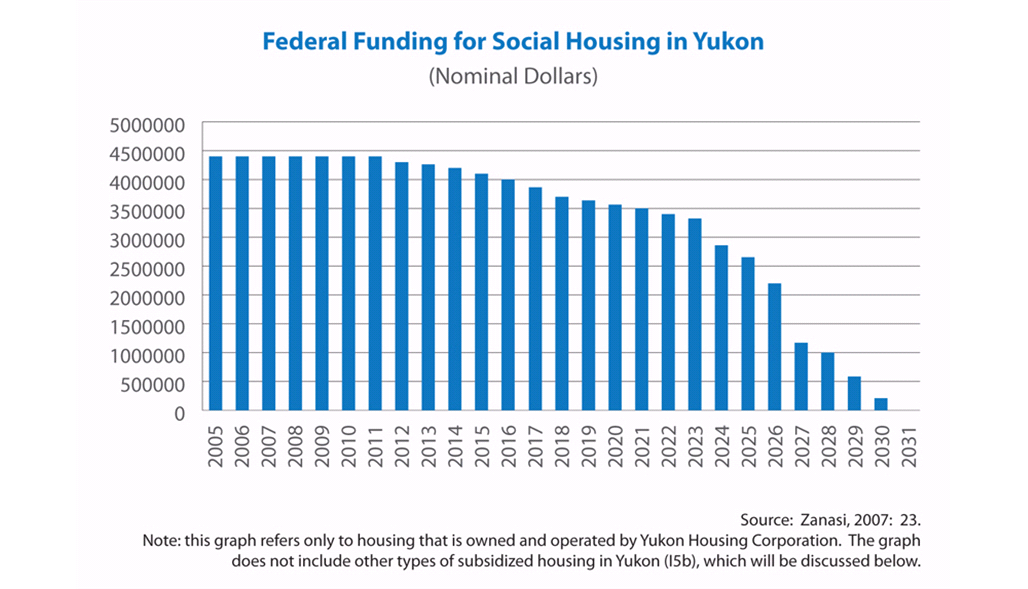 -Yukon is one the only jurisdictions in Canada that fully 'claws back' the National Child Benefit Supplement from SA recipients, thereby denying households on SA up to $2,200 annually for one child. This is presumably done by the Yukon Government in order to make gainful employment seem more attractive. (However, another way of making gainful employment more attractive would be to invest more in child care.)

-The report discusses findings from recent research on Quebec's $7/day daycare program. That research argues that Quebec's program has resulted in 70,000 additional mothers being gainfully employed; it also argues that for every one dollar the Quebec provincial government spends to operate its daycare program, it gets more than one dollar back in provincial tax revenue. Yet, my report notes that fewer than one-third of Yukon children are in licensed child care.

-Over the years, the Yukon Government has relaxed its earnings-exemptions rules for SA recipients. This has made it easier for Yukon's SA recipients to earn money from gainful employment. SA benefit levels in Yukon have also increased steadily — even after adjusting for inflation — since the mid-1980s.

-Yukon's economy has been performing very well in the past decade. Using tax data put together by fellow PEF Blogger Armine Yalnizyan, my report notes that, between 2001 and 2008, the number of Yukon tax filers (i.e. individuals) earning more than $250,000 annually more than quadrupled.

-Yukon, along with Alberta, has no public debt.

-The report reminds readers that, in November 2010, an all-party House of Commons Standing Committee recommended "that the federal government immediately commit to a federal action plan to reduce poverty in Canada…" The report also recommends that the Yukon Government, in addition to taking measures of its own on poverty reduction, remind the federal government of the vital role that such a federal action plan could play in poverty reduction.

All of the information pertaining to my policy report can be found here: www.homelesshub.ca/Yukon.

Reprinted with permission from The Progressive Economics Forum

Nick Falvo is a doctoral candidate at Carleton University’s School of Public Policy and Administration and teaches a course on affordable housing and homelessness in Carleton’s School of Social Work. His research interests include poverty, affordable housing, social assistance, homelessness and post-secondary education policy. Under the supervision of Dr. Frances Abele, he is currently involved in two SSHRC-funded research projects looking at poverty and affordable housing in Canada’s North. And his doctoral dissertation, under the supervision of Dr. Saul Schwartz, consists of three essays on social assistance. Nick is a frequent blogger and op-ed writer, a steering committee member of the Progressive Economics Forum (PEF) and the PEF Events Coordinator for the Annual Conference of the Canadian Economics Association. Prior to his doctoral studies, Nick was a Parliamentary Intern in Ottawa, and then worked for 10 years as a community social worker with homeless persons in Toronto. Contact him at falvo.nicholas@gmail.com