There are an estimated 629,300 veterans living in Canada as of 2020. And of that number, it’s estimated that about 32% face significant difficulties transitioning from military service to civilian life — putting them at risk of mental illness, addictions and homelessness. In fact, veteran homelessness is a growing issue in Canada, and experts are concerned.

So, what is actually known about veteran homelessness in Canada? What is the Federal government doing to address the issue, and what work still needs to be done? In this blog, we’ll explore the stats and facts.

What We Know about Veteran Homelessness in Canada

The State of Homelessness in Canada 2016 reports that there are 2,950 veterans experiencing homelessness, making up 2.2% of the homeless population across the country. In Metro Vancouver Region’s 2020 Point-in-Time Count, 5% of respondents indicated that they had served in the Canadian Forces. In Toronto, the same percentage was reported in their 2021 Street Needs Assessment. Alberta’s 7 Cities (Calgary, Edmonton, Red Deer, Grande Prairie, Medicine Hat, Wood Buffalo, and Lethbridge) Coordinated Point-in-Time Count for 2018 found that of those surveyed 7% had military service.

According to Everyone Counts 2018, it was found that 82.7% of the veterans interviewed were men, with an average age of 48 years old. However, according to a 2019 report, more than half of the veteran population using homeless shelters under the age of 30 are women. An earlier 2011 study by Forchuk and Ray, reported that 37% of their research participants were either separated or divorced, 42% had a high school education, and 74% identified as Caucasian. The study also showed that many participants had experienced chronic homelessness, over 5 years on average. For many, there was a significant lag time between the time they left the Canadian Forces (over 24 years ago) and when they first experienced homelessness (9.8 years ago), indicating a long path into homelessness. 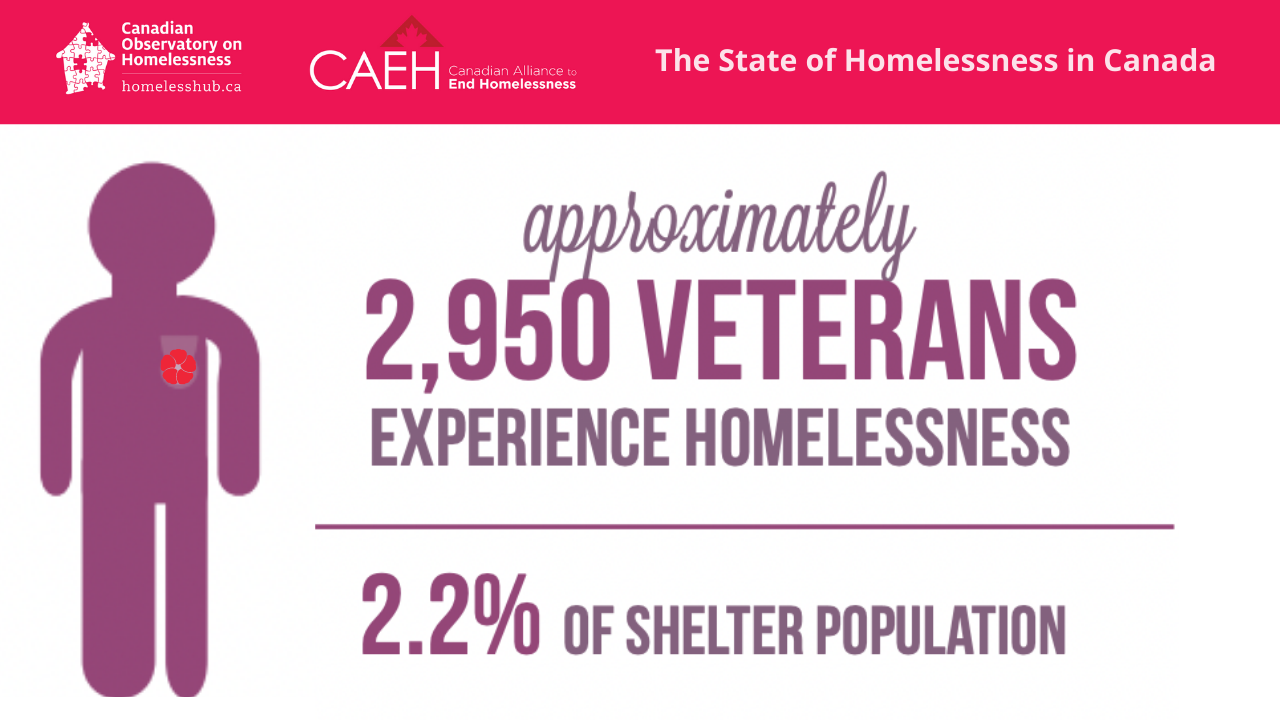 Another study found that rates of PTSD in Canadian veterans varied between 11% and 79%. However, beyond these demographical criteria, not much else has been researched, and until further quantitative data is published, no safe assumption can safely be made on the approximately  629,300 active and retired Canadian veterans.

While PSTD is common among veterans, Veteran Homelessness expert Cheryl Fornchuk, suggests that this is rarely the reason why this population experiences homelessness. In fact, one of the most common reasons is the difficulty in transitioning to civilian life after returning from service. One veteran described the transition “like being on Mars and coming back to earth” in Fornchuk’s 2011 study. 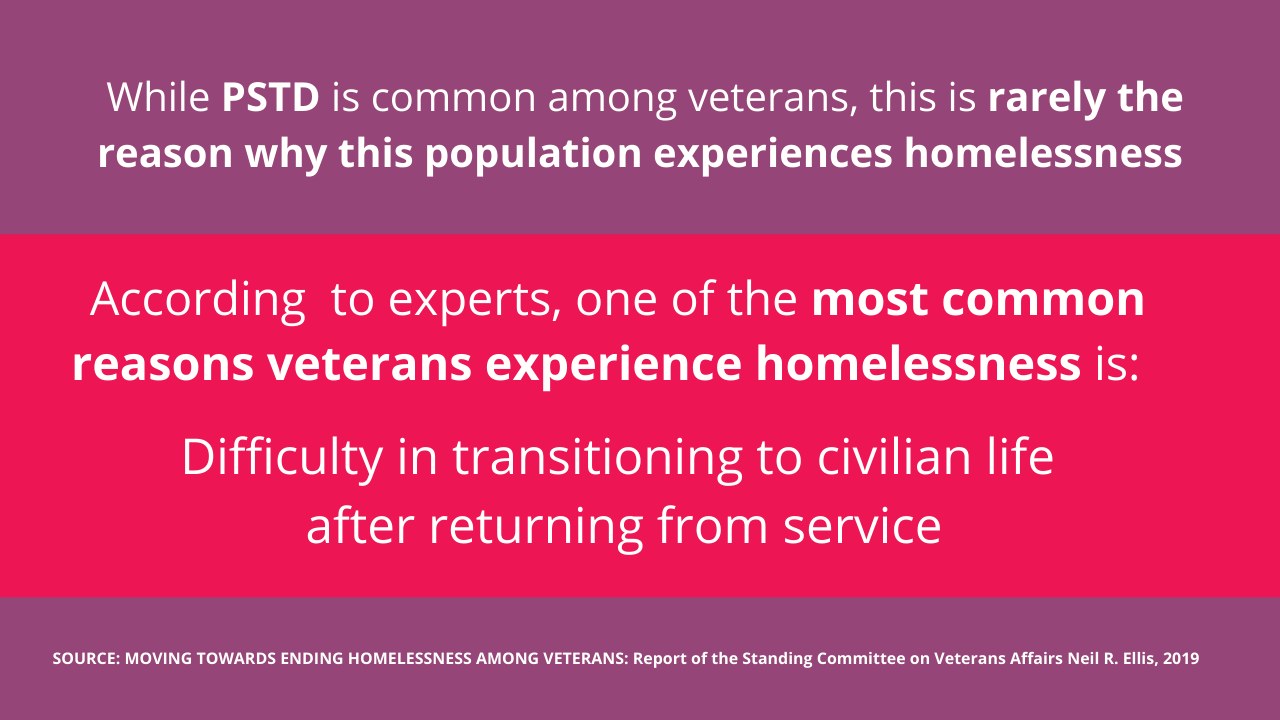 “We know that there are many pathways into homeless...What sets veterans apart is that they not only deal with all of these same issues but they also struggle with their transition from military to civilian life.” - Debbie Lowther, VETS Canada

Regardless of the time of their release from military service, many veterans have expressed the need for a structured transitional program over several months that can assist them with adapting back to everyday life in their communities. Supports with personal finances, budgeting, vocational rehabilitation, family counselling, mental health, substance use, housing, and paper work, are just some of the supportive services that veterans mentioned that they would like to receive.

This transition can also affect veterans’ mental health and substance use. Studies show the prevalence of addiction and mental illness among veterans but especially for those experiencing homelessness. This could be a contributing factor to their homelessness or may have been triggered and/or worsened by the stressful realities of not having a home. While 11% of veterans suffer from post-traumatic stress disorder (PTSD), many reported using alcohol to deal with their mental health, and some started using while in the military. 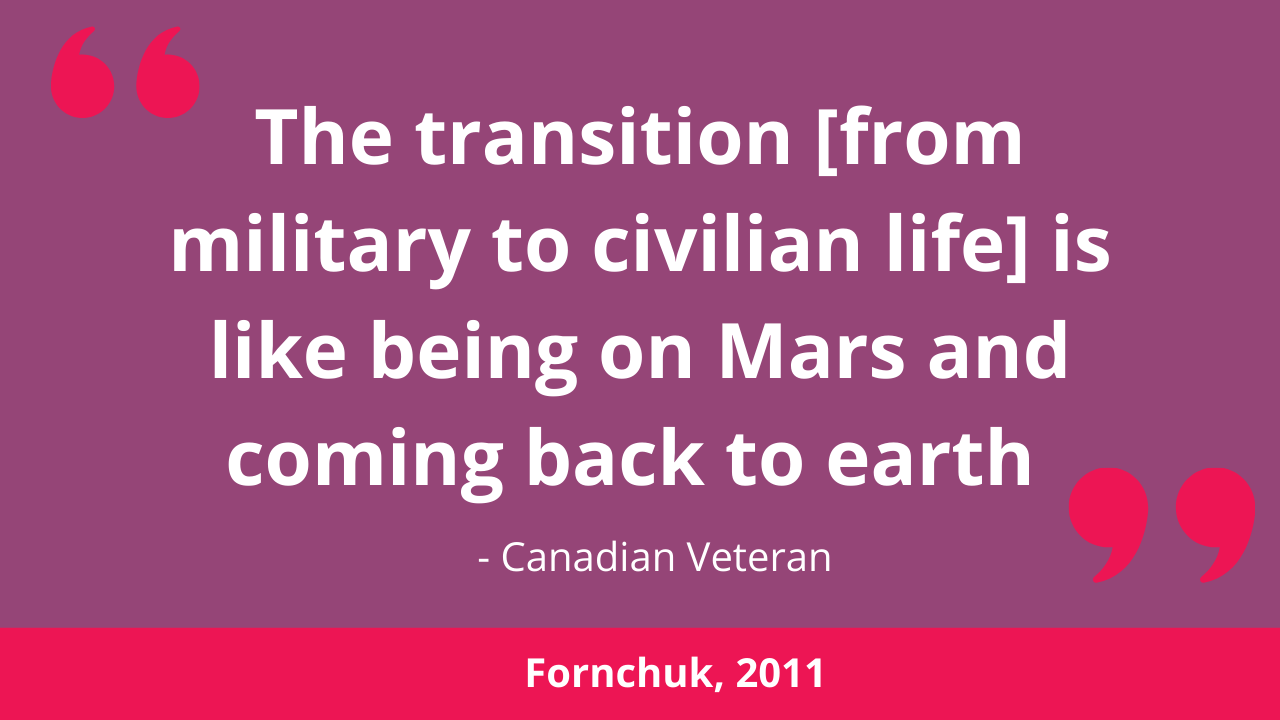 There are several key considerations to attend to when addressing homelessness among veterans:

In the United States, the National Alliance to End Homelessness identified additional factors, such as traumatic brain injury, sexual trauma while serving in the military (especially for women veterans), lack of transferable employment skills, lack of strong social support networks, shortage of affordable housing options, and low living wage jobs. These factors combined with PTSD or another mental illness and/or addiction puts veterans at greater risk of homelessness than the general population.

What is the Federal Government Doing?

The Government of Canada’s Homelessness Partnering Strategy (HPS) is providing an additional $567 million over two years, beginning in 2022-23 to prevent and reduce homelessness in Canada. Additionally, during 2022-23, $45 million will be provided to pilot a program with the goal of reducing veteran homelessness through targeted supports.

In 2021, the Government of Canada also announced that they will be providing $1.5 million to help create housing for veterans at-risk of or experiencing homelessness in Ottawa.

In 2016, Veteran Affairs Canada reopened 9 previously closed staffed offices across the country to improve access to services for veterans. They also added an additional office in Surrey during the same year. At these offices, veterans are able to access information on supportive services, which include:

What Work Needs to Be Done?

In addition to these efforts, The State of Homelessness in Canada 2016 calls for a Housing First strategy to reduce emergency shelter use among veterans, and urges the federal government to provide:

With new policy commitments to address homelessness on the horizon, service providers, advocacy groups and all Canadians have an opportunity to demand from the federal government that no veteran ever experiences homelessness.

Support Services for Veterans Across Canada