Many Canadians are not aware that over 4,000 people were enslaved in Quebec and Ontario between 1671 and 1831. Two-thirds of those enslaved were Indigenous Peoples and one-third were of African descent. In Nova Scotia, there were 10,000 African people by 1816 and many of these people were either indentured or enslaved.  This highlights the role that Nova Scotia played as a major route in the forced transatlantic movement of people, first from Africa to Europe and then to North America and the Caribbean. The total number of enslaved people across Canada remains unknown because the number of enslaved Africans in other provinces is yet to be counted or studied.   Research focusing on Slavery in Canada suggests that the number of African people enslaved in Canada is likely higher than the number in the official count as a result. The lack of complete data on enslaved African people in Canada represents a form of erasure or minimization of the experiences of Black people in Canada and understates the extent to which enslavement is part of Canada’s legacy.

What is Emancipation Day?

Emancipation Day has been recognized in Black communities across Canada well before it became an official holiday in Canada on March 24, 2021. The first such event dates back to 1862 when the descendants of Blacks who had settled in Simcoe and Grey Counties in Ontario established what they called Emancipation Festival. Similar events have also been taking place in Windsor, Ontario since the 1960s when African descent people living in Chatham, Dresden and North Buxton travelled to Windsor to be part of events honouring their ancestors who had escaped enslavement.

The development of the Slavery Abolition Act and the House of Commons vote in 2021 made August 1st a national holiday. It indicates the recognition of the importance of the abolition of slavery in Canadian history. This official designation is also meant to encourage Canadians to recognize that there was slavery in Canada and learn more about the history of enslaved Canadians and engage in the ongoing fight against anti-Black racism and discrimination.

Officially, Emancipation Day marks the abolition of enslavement. However, in the commemoration events in Black communities across Canada, Emancipation Day is also a day of and for political and social actions for inclusion and the recognition of the continued struggles for liberation. It is in this spirit that we bring our attention to Black youth who are experiencing homelessness this August 1st. At the Canadian Observatory on Homelessness (COH), we are working to deepen our knowledge of Black youth homelessness. This includes mapping out the various ways that Black youth end up on the path into homelessness.

What is the connection between Emancipation Day and Black youth homelessness?

Yet, we know both through research and anecdotal evidence that Black youth are overrepresented in the homeless population, especially in urban centres like Toronto. Like much of Black history and experience in Canada, their stories remain hidden in plain sight, unacknowledged and therefore untold.

In the first national survey on youth homeless in Canada, Without A Home, 28.2% of the youth surveyed who have experienced homelessness identified as belonging to a racial group. In the second Without a Home survey, 15.4% of those captured in the survey identified as Black as indicated in the chart below. 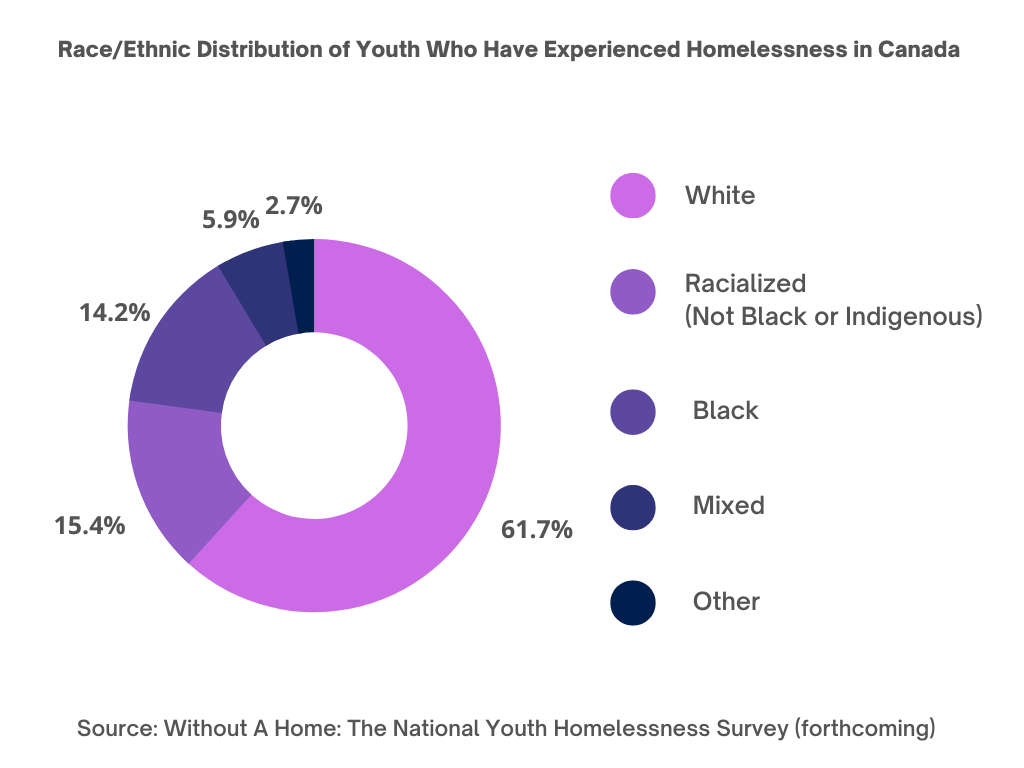 The COH is currently conducting a deeper analysis of this data to better understand the experiences of Black youth captured in the survey. We are also conducting research that focuses solely on Black youth experiencing homelessness or housing insecurity in five municipalities: Durham, Halton, Peel, Toronto and York. A key element of this research is the use of an intersectional, racial and equity lens. We hope that the data provided through this research will aid the efforts to prevent homelessness and housing insecurity among Black youth.

As we commemorate Emancipation Day this year, the existence of Black youth homelessness reminds us there is still work to be done and to sharpen our efforts on ending anti-Black racism and discrimination. The research we are conducting on Black youth experiencing homelessness will help us highlight their experiences and bridge some of the research gaps.

How to Participate in Emancipation Day 2022

Owen Sound, Ontario
Participate in commemoration events that are the oldest (160 years) of such events in the country.

Toronto, Ontario
The Confronting Anti-Black Racism Unit (CABR) at the City of Toronto is organizing a whole month's worth of events. It has designated the month of August as Emancipation Month and hosting an in-person flag-raising event to mark the beginning of the commemoration on August 2nd at North York Civic Centre. You can also visit the Blackhurst Cultural Centre to learn more about Black history.

Online
Watch a documentary on North Buxton – one of the many towns in Canada formed by people who escaped enslavement to settle in Canada.