Objective: Understanding factors associated with heavy drinking among homeless youth is important for prevention efforts. Social networks are associated with drinking among homeless youth, and studies have called for attention to racial differences in networks that may affect drinking behavior. This study investigates differences in network characteristics by the racial background of homeless youth, and associations of network characteristics with heavy drinking. (Heavy drinking was defined as having five or more drinks of alcohol in a row within a couple of hours on at least one day within the past 30 days.)

Results: The networks of Black youth included significantly more relatives and students who attend school regularly, whereas the networks of White youth were more likely to include homeless persons, relatives who drink to intoxication, and peers who drink to intoxication. Having peers who drink heavily was significantly associated with heavy drinking only among White youth. For all homeless youth, having more students in the network who regularly attend school was associated with less risk of heavy drinking.

Are Social Network Correlates of Heavy Drinking Similar Among Black Homeless Youth and White Homeless Youth? was published in the Journal of Studies on Alcohol and Drugs, 73(6), 885 in 2012. 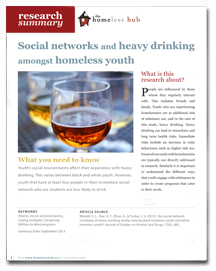