Childhood Abuse Brought Me to the Downtown Eastside

In 1954, when I was six years old, I came to Canada from Germany. Ever since then I have lived in Vancouver. When I was growing up, my father abused me physically, mentally, and sexually. My mother did nothing to protect me. At the age of 13, I ran away from home and stayed with my friends in New Westminster until I turned 17. I was pregnant and went back home to Vancouver to give birth to a baby girl in 1966. She was apprehended in 1967 by the Ministry of Child and Family Development (MCFD). She was only 9 months old.

Shortly after that, at the age of 19, I ended up in the Downtown Eastside. I found myself sinking into a depression and was constantly tormented by the horrific memories of my father’s abuse. I started using alcohol and drugs such as LSD, and entered into several abusive and exploitative relationships with men.

In 1969, I moved to Winnipeg with a man. I quit drugs and had two children. But the relationship did not work out and I returned to the Downtown Eastside with one of my daughters in 1978. I ended up in another relationship, but this man began assaulting my young daughter. I did not know about this right away, as soon as I found out I broke up with him. But by then, MCFD was re-involved in our lives because they already a file on me, and my daughter was apprehended and taken away from me.

I started drinking again and even tried heroin. It was hard to survive without enough money. I hardly ate. I relied heavily on food banks and collected recyclable bottles to make some extra dollars. I thought about prostituting myself, but I felt too ashamed and was worried that if my children found out, that they would look down on me. I was homeless and stayed at the Triage Shelter and Lookout Shelter.My favourite hangouts on the street were on Main and Hastings, Hastings and Abbott, as well as Hastings and Dunlevy. All the people there were also drinking and doing drugs and I felt like I fit right in. It was the only life I knew. In the bars, I would always meet men. They saw me sitting alone and would ask if they could join me, and I would let them. The men were never young and always offered me drinks. When they told me to come home with them, I would tell them that I had a disease.Now, almost twenty years later, I am clean and sober and have housing. But the issues in the Downtown Eastside, and the struggles that bring women to the Downtown Eastside, persist. Thousands of people still sleep on the streets or are in shelters because of a lack of affordable housing, and every year the Homelessness Count goes up. According to BC Housing’s own data, there has been an overall net increase of only 280 new social housing units over the past five years. Meanwhile, hundreds of condominiums are going up for the rich, supported by City Council and the dollars of the real estate industry, which displaces and pushes us out of our own neighbourhood.Why is it so hard to treat us as human beings? The government has the ability and the capacity—but not the political will—to ensure the elimination of poverty. I challenge any politician to switch places with us. Sleep in the alley, stand in a food line, and live off $6 a day; then perhaps they will understand our pain. We need housing. We need safety for women. We need more services like detox centres and health support teams. We need the police to stop their brutality, stop their illegal searches, stop beating poor people up, and stop arbitrarily arresting residents of the Downtown Eastside.For all these reasons, I like to be involved in supporting the Downtown Eastside. In 2006, I was involved with other women in starting the night shelter for the Downtown Eastside Womens' Centre (DEWC). We occupied the DEWC - which at the time only operated in the daytime - because we did not want the doors to close on homeless women who were getting kicked out and had nowhere to go. So we staged a sit-in at the DEWC after-hours and refused to leave. All night, we made beds for women with donated blankets and served food. After about 4-6 weeks of operating the shelter as volunteers and doing lots of media events and rallies, BC Housing funded a night-time shelter.Another major accomplishment that I was involved in was the Olympic Tent Village, which the DTES Power of Women Group and others organized during the Olympics. We were opposed to the Olympics because $7 billion was going to towards a big sporting party for tourists, while the Downtown Eastside was becoming poorer and homelessness had tripled. The Olympic Tent Village, which began on February 15 2010, was a safe place for Downtown Eastside residents, away from the cameras and the police.Every day I would help prepare meals for the site and gather donations. One day there was a young homeless woman with her daughter who arrived at the Tent Village. She would stay in a corner because she was afraid that she could get reported to MCFD as homeless and then her daughter would get apprehended. So I would take food to her tent and bought a toy for her daughter. Everyone was fed and happy and people felt free at the Olympic Tent Village. We even had activities like singing and drumming and storytelling. After one month, about 80 people got housing as a result of the pressure and advocacy at the Olympic Tent Village.Though the institutions that govern and rule the Downtown Eastside are ugly, as you can see, the residents of the Downtown Eastside have so much beauty and strength.

Madeline A. volunteers at the Downtown Eastside Womens' Centre and is a member of the DTES Power of Women Group. She likes talking to other women and listening to women when they want to talk about their problems and tries to assist everyone she can.This story is part of the Downtown Eastside Power of Women “In Our Own Voices” writing project. For more information and to read more stories, please visit the: DTES Power of Women Group WebsiteImage credit: MURRAY BUSH, FLUX PHOTO 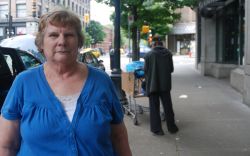