The Intergenerational Impact of Child Apprehension

At the age of 12 years old is when the abuse in my parents’ home started. My siblings and I were subjected to physical and emotional abuse and violence by my parents. We had many visits from the Ministry of Child and Family Development (MCFD) but my siblings and I were forced to lie about the abuse because we were afraid that telling the truth would result in even more abuse.

In 1994, at the age of 15, I was pregnant and gave birth to my first child. The abuse from my parents continued, until I could not take it anymore and I ran away from home. The following day I was taken into MCFD’s foster care and from then onwards, I was moved from home to home. I lost custody of my son, who was also placed into the foster system, thus perpetuating an intergenerational cycle of child apprehension and misery in the foster system.

I have read a report that in B.C., young women who have been permanently apprehended by MCFD are four times more likely to become pregnant than young women who have never been in the foster care system. I, too, became pregnant with my second child while in foster care. During my pregnancy, the foster mother slept all day, and I was responsible for our meals and all the cleaning. I was constantly kicked, my hair was pulled, and I was kicked in my stomach. I made phone calls to MCFD, the police, and youth advocates for more support for my unborn baby and I, but to no avail. Instead, when I gave birth, MCFD apprehended my second child as well. Since they were both apprehended, I have not seen my two sons, nor do I know anything about their well-being.

Finally, at the age of 18, I moved into an independent living situation where I had my own living quarters with my own facilities for cooking and cleaning. At the age of 19, I landed my first job as a home supporter worker and was able to financially support myself. That is when I started drinking heavily, almost every night.

At the age of 19, I was pregnant again with my daughter, who is now 8 years old. A few years later, I have birth to my second daughter, who is now 4 years old. I was the primary parent for both of my daughters until MCFD got re-involved in my life. I did everything MCFD asked of me as a young single low-income parent. I did the best that I could to support my daughters. I quit drinking and I never did drugs.Then in 2009, MCFD made several visits to my home alleging that I was constantly yelling at the girls and that on one occasion I had hit them. On Sep 14, 2009 a MCFD social worker advised me that the Ministry was apprehending the girls and that the matter was now before the courts.Since then, I have been going to every court date and every visit with my daughters, even though the Ministry was making it very difficult for me to have visits. I went to a parenting program that they wanted me to attend. While MCFD is falsely pointing fingers at me, I find that the foster parents are completely negligent in caring for my children. In 2010, my youngest daughter had an infected hang-nail and a 101 degree fever. The foster parents refused to take her to the doctor, so during a Court date I had to show the social worker a photograph of my girl. The Ministry then granted me permission to take my daughter to the Emergency, where she was placed on an IV and antibiotics for a week.This year, my lawyer and I attended a “mediation” with the Ministry. I attempted to get answers as to how they were able to apprehend my children without any proof to back up their allegations of me abusing my girls. The Ministry did not provide any answers. They simply said that their intention was to seek a continuing custody order to keep my children in the foster system and will be going to Court to seek an extension. I then advised my lawyer and the Ministry that it was my intention to have my girls come home with me. We are waiting to set trials for next year.In the meantime, I start weekly 1-hour supervised visits with my daughters this month. If all goes well, MCFD will increase my visits after one month. I will also be able to attend all the girls’ doctors’ appointments and extracurricular activities. I recently attended a meeting with MCFD and the foster parents to arrange visits and access to my daughters’. The foster mother said that if she had to supervise the visits then she would consider sending the girls to another home! I am so frustrated by her attitude and MCFD allowing my daughter’s to be shuffled around like this.Over the past two years, I have been left feeling hopeless and alone. I feel like I am being ganged up on by MCFD. I have resorted to smoking cigarettes to keep my stress levels down. I wonder, how I can ever be happy without my girls at home with me? Since coming to the Downtown Eastside Women’s Centre I have gotten a lot of support and I have learnt that I am not the only one whose children have been apprehended by MCFD. Other women have advised me that it is possible to win against MCFD, which brings me hope.But my question remains unanswered – why are so many single mothers, especially Aboriginal, being targeted by the MCFD? I found out that as of September 2009, only 8% of children in BC are Aboriginal, but approximately 53% of the children being apprehended are Aboriginal. We are stereotyped as abusive, but physical abuse and sexual abuse are not the primary reasons that children are apprehended. In fact, physical harm by a parent was only cited as a ground for removal in ten percent of child protection cases in the Lower Mainland. Apprehensions are generally the result of a parent’s struggle with poverty; sixty-five per cent of all child apprehensions are from single parents on welfare.Serious harm is being done by keeping families apart and by tearing children away from their mothers without just cause. More times that not, siblings are separated from each other and placed in different foster homes. It is not only the children who are harmed, but also the mothers, who then suffer from severe depression and sometimes spiral further into addictions. We should do more to unite against MCFD abuses. It is time that these injustices end.

Courtney is a volunteer at the Downtown Eastside Womens' Centre as well as a member of the DTES Power of Women Group.

This story is part of the Downtown Eastside Power of Women “In Our Own Voices” writing project. For more information and to read more stories, please visit the: DTES Power of Women Group Website 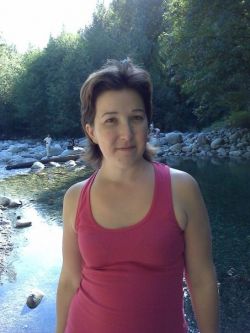