The heart of the Downtown Eastside (DTES) is home to survivors of the war on terror: the terror of poverty, physical and spiritual abuse, child apprehension, addictions, and residential schools - all of which quietly destroy the human spirit. Yet in spite of its image as the poorest urban postal code in the country, the DTES has the highest number of art galleries per capita in the country. This seeming contradiction becomes more understandable when one looks more deeply into the neighbourhood. The DTES is made up of the most extremes in our society —brutality and indifference on the one hand, and selfless generosity and compassion on the other hand. 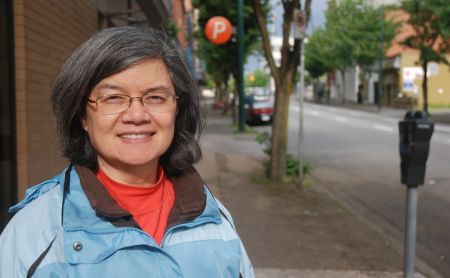 My entry into the world of the DTES started four years ago when I spiraled into homelessness due to a mental illness that was later diagnosed as bipolar, anxiety, and ADHD. It seems that it runs in my family and I had battled it in the form of depression for much of my adolescent and adult life. A bout of hypomania took me from working at a university and living a comfortable middle-class existence in one of Vancouver’s priciest neighbourhoods to becoming homeless.

In this province, there are 15,500 adults with severe addictions or mental illness who are homeless. When one is mentally unstable and doesn’t have stable housing, keeping track of health appointments takes a backseat to overt survival. People are too busy foraging for food, waiting in line for a shelter bed, pandhandling for a few dollars, or searching for clothes or cardboard to protect against the rain and snow. Under such stressful situations, even the most mentally stable and capable will become unstable!

Soon enough, I secured housing in a single-room occupancy with a shared bathroom. I was very fortunate because I had kitchen facilitates in my room and the building was well-maintained, both of which are rarities. I realized that once a person is tagged with the stigma of mental illness, life changes substantially. One's credibility, trust, and reason immediately diminishes before the eyes of others, particularly authority figures like police, doctors, and lawyers. We become invisible. In the Downtown Eastside, it is even more evident: the poor who are seen but not heard, the walking wounded who are over-medicated on illicit or prescription drugs. The DTES is overrun with different agencies that provide services to its vulnerable low-income community. However for someone who is mentally unwell working through the agencies and maintaining continuity to obtain services is such an impossible labryinth to negotiate that so many people fall through the cracks.

But home is where the heart is and the DTES is very much home now. What fascinates me about this 'slum' neighbourhood is the beauty of the trees and plants, and correspondingly, the people. Though I have moved to a new apartment in the West End and have just finished professional mental health peer support trainings and advocacy programs, I spend most of my time in the DTES.

The most prominent memory I have of the DTES is of a hot August afternoon when the police had roped off a whole block with their yellow tape. Why? Because someone was about to jump off a 6-storey building. I was with our beloved Power of Women facilitator-activist Harsha who asked 3 of the 10 attending police officers if a net was being called for the person. The police officers responded with condescension, stating that he did not know what Harsha was talking about and tried to shut her up by intimidation. I quietly observed the abuse coming from the police officer to someone who only wanted to help.

What interrupted the exchange between them was another officer yelling at a partly-conscious older man on the sidewalk to get on the other side of the yellow tape. The police officer then proceeded to lift the man up, handcuff him, and drag him across the intersection. In trying to balance himself, the older man lost one of his shoes. There was such an overwhelming display of disrespect and indifference shown to this man that it was hard to remain silent. Many of us started commenting on the negativity of the police, which in turn made the police even more confrontational.

Eventually, another police car drove up and five police officers proceeded to the trunk. What emerged from the trunk were two rifles and a two-person SWAT team also stepped out of the car. I gasped. That was how they were going to deal with a person wanting to jump off a building! That single incident exposed the attitude of the police towards anyone that they deem mentally unbalanced- a John Wayne shoot-em-up mentality. I understand why the people in the DTES do not trust the police. The police consider people living in the DTES as expendable human beings and treat them with such disdain.

This is what residents breathe and live with on a daily basis—fear and intimidation by the police. For what, you ask? For being poor, for being poor and indigenous, for being poor and of colour, and the most vulnerable are those who are poor, indigenous, and women. Meanwhile, the real criminals – the monied few who rape the land and destroy hearts of peace – authoritatively rule over us as their banks create financial messes and their police and military try to squash us.

Last year, the DTES witnessed an intensification of the violation of civil and human rights by the police upon vulnerable homeless men, women, and youth. Just before the Olympic Games, more police officers were hired in the DTES and they indiscriminately ticketed harassed, intimidated, and arrested people. We witnessed this almost every day in the DTES and heard horror stories of homeless friends being dragged off in police cruisers for no reason.

To try and protect our most vulnerable DTES residents, members of the DTES Power of Women group - in conjunction with anti-poverty and anti-Olympic activists - were able to create and host an Olympic Tent Village in a fenced-off vacant lot in the DTES during the Olympics. Hundreds of homeless men, women, and children moved into the Olympic Tent Village and were given tents and were protected from the intimidation of the police. The now world-renowned Olympic Tent Village lasted four weeks and demonstrated to us what true democracy can do: create a liveable space of peace and harmony where each member-resident listens, speaks, is heard and then decides collectively at a daily community meeting what self-rule looks. What I have learned so wisely from so-called 'mentally-unbalanced-loser-morally-corrupt' DTES residents is what social justice really is. The grace, joy, and utopian home of the Olympic Tent Village is something that I shall carry for all the days of my life.

Shurli is a member of the DTES Power of Women Group. She advocates for social justice by ending poverty; by ending the marginalization of Indigenous and mentally or physically-challenged people; by providing safe affordable housing, wholesome food, education, and meaningful work to all; and by living peacefully with respect and dignity for all Life in harmony with Nature.

This story is part of the Downtown Eastside Power of Women “In Our Own Voices” writing project. For moreinformation and to read more stories, please visit the: DTES Power of Women Group Website