"My father physically abused me so I left and went to go live with my friend's family."

It all started when I was living with my father in Tillsonburg. Tillsonburg was where I lived my whole life. My Dad, my sister, and me were living with my Uncle. My brother who had been living with friends, left Tillsonburg to go live with my mother in Mississauga. My father physically abused me so I left and went to go live with my friend's family. I lived there for about three months. When I went to go live with my mom in Mississauga she kicked me out and sent me back to Tillsonburg, after about a week. She left me with some clothes, that's about it. When she sent me back it was April 2006. I was 14 years old and it was the first time I had ever felt alone. I had no contact with my Mom because I had no phone number from her and no contact with my Dad because he moved to Alberta.

So I was living with some of my friends that had their own place. It was the worst place I had ever lived in. A lot of kids at age 14 or 15 would think I would be living the life not having to go to school and hanging out with my friends all day and partying all night. It was fun for about two months but the house was always dirty and it stunk. There were animal feces everywhere. I slept on the floor. There barely was any food in the house and when there was, nobody was allowed to eat it. There were always people moving in and out. There was no hot water, ever! There was always conflict between everyone.

Finally, after so long, I moved out with another friend that lived right above my other friends. He was twenty-one and I was still fourteen. It seemed great then. But when I think about it now what we were doing was wrong, we were having sex. But as the stupid fourteen year old I was, I thought it was okay at the time, even though my best friend told me it wasn't. I lived with him for a couple of weeks until we got into a fight and I got kicked out.

For about five months, I would spend the night here and there. I would steal food, anything I could do to survive. At this point I felt like I had nothing. I felt suicidal and thought I had nothing to live for but then I would think about my sister and stay strong. The sad part about all of this is that my family wouldn't help me at all. When I was not allowed to stay at a friend's house anymore, I had to resort to the outside, sleeping on park benches and slides at the park.

On June 21st, 2006, I went to my Aunt's to see if she knew either my Mom's or my Dad's number and it so happened she did. I called and they both sent me a total of about $180 for my birthday. Stupid me, I spent a lot of it on booze, but I bought food and clothes with the rest of the money. I got arrested and got a $65 fine. For about five months that was how my life was, lonely and worthless. I felt there was no point to it at all until I met a family that I will never forget.

They helped me with everything. I still felt lonely but I felt that there as something to live for again. I got into contact with my Dad again. He came to Tillsonburg from Alberta. My Dad and me stayed at a friend's house for about a week. I didn't feel as alone anymore as I had someone with me. My Dad and me went to the Salvation Army and they told us about a family shelter so my Dad's friend drove us into London. This was about the middle of November 2006. We stayed till the beginning of January.

It wasn't that bad, considering I had a bed to sleep in, food in my stomach, people to talk to and money that they gave us every week. The only thing I didn't like was everyone had a problem with someone else that stayed there and some people were there only because they were lazy. Living in a shelter showed me a lot, like there are more people than just me that understand the things that I have been through. There are also people for everything. Someone to help us find a place, meet new people and someone to help us once we move into the community.

I am sixteen now, and that all happened in two years. Wow. I am happy now. I am no longer living with my father. I was removed from the Children's Aid Society as he became abusive again. I am staying with a friend of the family with my little sister. I am as happy as I have been for a long time.

That is my story. 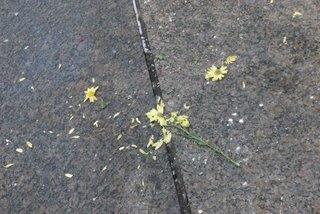