My troubles in life started out in the usual, 'I hate everyone and I know what I'm doing' kind of way

A 26 year old man is homeless since leaving his parent's house as a teenager.

My troubles in life started out in the usual, "I hate everyone and I know what I'm doing" kind of way. Just to let you know, I was wrong! I moved out on my own with some rather hateful words to my parents - my father - to be precise. I stayed on a friend's couch for the first day and they got me to the Catherine Booth House. I thought I was going to be my own person going by my own rules. You know, all that good stuff that comes to you when you move out on your own? Well, sorry to be the one that lets you know, but that's all fiction. Even now, at the age of 26, I still have rules and I'm answering to people. I follow rules placed by landlords, employers, government, and ECT.

Well, as I was saying, I had moved out in a fit of anger in grade 7 or 8. Let's just say that the first attempt failed miserably and I moved back home. Years went on and I tried it again. In grade 10, I moved out with 4 other friends into a big, but crummy old house downtown. But I had a problem; I had no job, no furniture, nothing. I had to busk and panhandle -sometimes for 10 or more hours straight - just to make rent. I ended up dumpster diving for furniture, clothes, and even food. At one point, I found a part time job working under the table, making next to nothing. I still had to worry about bills and rent.

Eventually, I even tried to go back to school (Compu College) but dropped out as soon as I got my loan 'cause I started drinking heavily. It later turned into an alcoholism problem. Time went on, friendships with my roommates ended and enemies started. The household broke up and I was homeless again. I tried to move back home but my parents had moved into a smaller home and had absolutely no room for me. So I had to depend on friends again. Thankfully, I have lived here in St. John's all my life and knew many people but not everyone has this luxury.

I lived couch to couch for a long time, eventually moving in with a girlfriend and trying it all over again. Throughout all these relationships and friendships, I got a horrible credit rating from late and unpaid bills, some of which I still haven't paid. So after my newest unsuccessful relationship had flopped, my apartment tally was around 7 to 8, not including places I crashed. My job count had made it up to the double digits. It was hard to hold a place without a good and steady job and it was hard to get a good job because I had dropped out of school around the time (how convenient) I moved out on my own. So this time I had moved in with some complete strangers, trying to get closer to my new job in the east end. Unhappy with my life, my home and my job, I quit without notice and without having a replacement job. I was evicted from my newest place, obviously, due to having no money for rent.

After that I ended up at the Choices for Youth shelter. Now, this shelter is nice, but it's not my home. I stayed for about a month and I had to move out. After I left Choices, I found another place to live. I wouldn't even wish this place on an enemy, but I had no choice. There was shit and piss on the floor (from present and possibly previous pets) and no clean dishes because they were covered in mysterious fuzz. There were fruit flies in the kitchen sink and on the counter and floor. The place was drafty and there was no lock on the windows, doors or the bathroom. There wasn't even a shower curtain until I made one from a few garbage bags. I was there almost 3 months and I was sick for 2 and a half months of that visit. There was one couch, one chair and about 11 people crashing on a regular basis. I slept on the floor in one room. One morning I was extremely hungover and a crazy chick screaming "Get the fuck out of my house!" woke me up. It turns out that the rent wasn't getting paid there either.

More months pass, more couch crashing and another bad relationship. So here I am now at my new and present place. I moved here because my ex and I were at each other's throats and I couldn't stand it anymore. I moved in here about 6 hours after I told her to go and F--- herself. I had been an alcoholic for many years now but this has been the worse point yet. Depression and excessive amounts of alcohol led me into drugs that I said I would never do, such as ecstasy and cocaine. My last night out I had consumed about - and maybe even over - $300 worth of booze, 2 hits of E and around $150 worth of coke.

Around 6 or 7 in the morning, I had gone home to go to sleep? or so I thought. In fact, what actually happened was a friend came home with me. We waited for the store to open up so we could get more beer and cigarettes (I have no recollection of this just to let you know). We drank the beers we bought and smoked some cigarettes. Around noon, we passed out after I had lit a cigarette. I caught my bed on fire. I woke up (thankfully) because my leg got burnt. When I woke up I couldn't see the other side of my room due to the smoke that had filled up the room. I have no idea how I put the fire out. I assume I just sat up and patted it out with my hand and then went back to bed. My friend next to me never even woke up through the whole ordeal. After I woke up the next day, and realized what happened, I swore to myself that I was never going to touch anything ever again. That was almost 8 months ago and I have been true to myself ever since. No cigarettes, alcohol or any kind of drugs. I'm getting a new roommate now and everything seems to be going fine for now and I hope it stays that way.

I hope my story makes sense to people and that they can relate to - and maybe even learn from - my mistakes. If I could fix anything in my life it would be to get an education, never to move out in anger, to know and be picky about my friends (because you never know who is going to be the solution to or cause of your problems), to stay away from drugs and alcohol, and to help a friend in need 'cause I appreciated it when it was done for me. Always remember that what goes around comes around.

I hope you enjoyed my story and that it positively impacts your life. Have a great day and remember: no matter how bad your day is, someone, at least one person, is truly thinking of you! 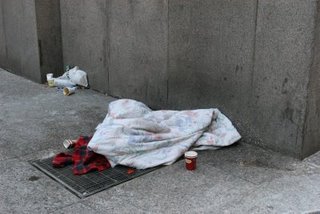