What's a "Good Girl" Doing Without a Home?

A middle class, small-town girl that journeys between rags and riches…

Being involved with The Homeless Hub project allows me to give back by telling my story, which is two fold: as a small town, teenage girl who was kicked out; and as a wife of a substance user, who asked her husband to leave, twice.

In my late teens, despite being raised with good values, I got kicked out. While I had the typical teenage "I want my freedom" belligerence, I was still a "good girl". I didn't smoke or drink, do drugs, have sex, or break the law. I was getting straight "A's", holding down a part-time job, minding my siblings after school, and helping maintain our home, while my folks commuted to work.

He worked the program, and seemed better when we spoke on the phone. In my naiveté, I thought he'd be "cured" and things would improve because he agreed that, once home, he wouldn't use, he would go to NA/AA meetings, and he would be truthful and responsible, or he would have to leave. Two days after returning, he broke his word and used. Bringing him a suitcase, I suggested he call his sponsor. I told him he had to stay clean for 6 months and prove he could honour our agreement, and live on his own, before I'd consider taking him back. I kissed him and left. I cried all the way home.
His brother took him in, but, tired of his lies and using, he kicked him out too. He then crashed at his "friends" houses for a while, despite being repeatedly encouraged to call the local shelter. We didn't know where to start, so I called Telehealth Canada. A few calls later, I finally got the number of the shelter and gave it to my husband. After a couple of tries, he finally got in, did his maximum 5 weeks, and then found a room for rent. He stayed clean for 6 months, but was at high risk of relapsing, and not ready for the responsibilities of home. Not wanting to allow my kids to go through hell again, since were just starting to heal, I asked him to wait longer. This sent him on a bender, getting him kicked out of his room. He finally hit bottom. Not working, he wasn't able to pay his expenses, let alone provide for us. His other sister took him in. He stayed clean, started to show more responsibility, and improved his attitudes towards fatherhood. We were all starting to recover. We went to marriage counselling, both of us started new jobs, and he has moved home. Life was great this summer! Fall is another story. We're now at risk of losing our home again: our line of credit is almost maxed out; my husband and I will be out of work over the next few months, and we don't have jobs lined up yet. That being said, we do have family support, drive, stamina, morals, and a work ethic to achieve goals while maintaining our integrity and dignity. We are willing and resourceful enough to find what we need to survive. We stay grounded by maintaining our daily routines, taking each day one at a time. We aren't settling for anything less than what we want or need. We know asking for help is the epitome of strength, and prayer helps us to keep the faith, hope, and love alive. "The greatest of these is love"1.

I hope my story brings to light the following: kids, raised with good values, ample food, access to education, proper shelter and clothing, can still became homeless; "middle class" families can actually be poor due to debt; homelessness happens in small towns, where resources are scarce or non-existent; people who face homelessness may not know where to begin to get help (educate and communicate more); people need others to believe in them before they can believe in themselves and achieve goals; free parental and marital resources must be easily accessible to arm couples with the survival tools to handle life crises, while nurturing children; mental illness and addiction issues are more common than most think; use of hard core drugs can happen to anyone's "daddy"; post partum depression has generational impacts; government educational financial assistance must be applied holistically for each applicant; and, homelessness can happen more than once in a lifetime.
1 Holy Bible, Letter of St. Paul to the Corinthians, 1-13. 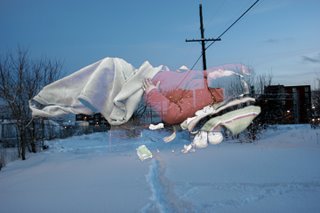