Given the growing interest in developing solutions to homelessness, it is increasingly important to know what works, why it works and for whom it works. There is extensive research that examines causes and current conditions of homelessness but little –although growing—literature that can describe effective interventions in a practical way. The sharing of solutions is key to avoid “reinventing the wheel” in each community. While there are few “one-size-fits-all” solutions to homelessness, with the right tools and information communities could learn from each other and adapt initiatives to local contexts.

Yet, many communities and service providers in the non-profit sector lack effective tools, resources and capacity to engage in rigorous program evaluation or to disseminate knowledge learned in order to assist service providers and program planners elsewhere. Sharing best, promising or emerging practices is about communication and alerting those working in the field to a strategy that demonstrates positive results.

In “What Works and for Whom”, the Canadian Observatory on Homelessness defines and explains the differences between best, promising and emerging practices as follows:

A Best Practice is an intervention, method or technique that has consistently been proven effective through the most rigorous scientific research (especially conducted by independent researchers) and which has been replicated across several cases or examples. To be a ‘best practice’, an intervention must be able to show that it produces better results than other approaches and that is a practice that can potentially be adapted with success in other contexts and/or scaled up to a systems-wide approach. In other words, there is a sufficient body of evidence that allows us to confidently say that the described practice is a generalizable example of something that works. It should be noted that some interventions might demonstrate scientific rigour, but never be generalizable in other contexts. For example, what works in Northern Canada may not, or should not, be expected to work in Toronto. An intervention for Indigenous Peoples might not be effective for new immigrants, for instance, despite being a best practice in its original context. Thus, an intervention that is generalizable within a specific context should also have merit as a best practice.

An intervention is considered to be a Promising Practice when there is sufficient evidence to claim that the practice is proven effective at achieving a specific aim or outcome, consistent with the goals and objectives of the activity or program. Ideally, Promising Practices demonstrate their effectiveness through the most rigorous scientific research, however there is not enough generalizable evidence to label them ‘best practices’.

They do however hold promise for other organizations and entities that wish to adapt the approaches based on the soundness of the evidence.

Emerging practices are interventions that are new, innovative and which hold promise based on some level of evidence of effectiveness or change that is not research-based and/or sufficient to be deemed a ‘promising’ or ‘best’ practice. In some cases this is because an intervention is new and there has not been sufficient time to generate convincing results. Nevertheless, information about such interventions is important because it highlights innovation and emerging practices worthy of more rigorous research.

When we speak more generally of ‘best’ or ‘promising’ practices, then, we are attempting to make a determination as to interventions that actually lead to effective and productive results, based on stated goals.

However, in order to make this determination, there must be solid evidence. We cannot simply assert that a given approach is outstanding without being able to demonstrate that it has an impact.

The determination of best and promising practices is, in the end, a question of evidence, and may involve conducting research or reviews of the literature, including meta-syntheses and meta-analyses. It may also involve ‘case studies’; that is, detailed investigations of specific examples. In either case, the goal of conducting such research is to make a determination about effectiveness, so as to assist in the dissemination and adaptation of practices that work.

There are many programs and reports that claim to demonstrate promising and best practices. However, there is incredible variation in the quality, rigour and amount of evidence that is used to back up these claims. Indeed, some programs or reports may make these claims without any documented evidence to back them up. 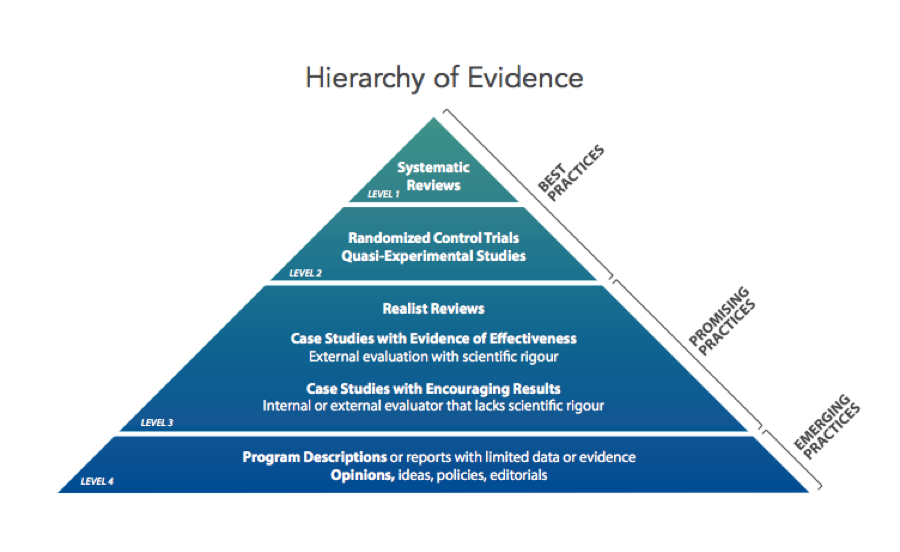