Many Canadians look to our neighbours to the south for blatant examples of legalized anti-Black and anti-immigrant policies. But Canada is not exempt from racist and colonialist regulations and practices that impact Black lives and Indigenous Peoples. These policies and attitudes have created deep-seated barriers for racialized people’s housing conditions, including housing affordability, stability, safety, and security of tenure. 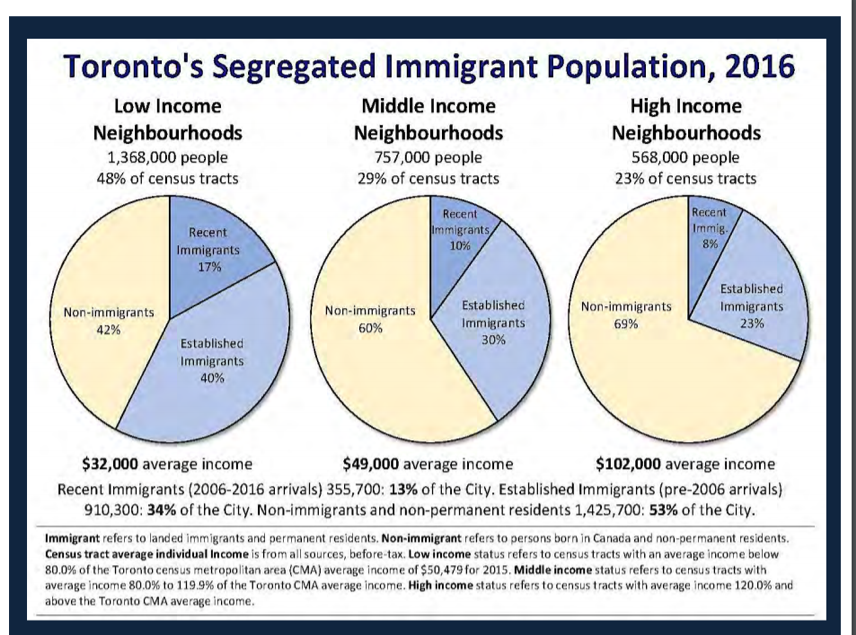 Post-arrival experiences for immigrants in Canada are often one of isolation, fear, and anxiety. These feelings are heightened when racialized immigrants and refugees come into contact with racial discrimination. The Black perspective on renting in Ontario, for example, shows how race and immigration status plays an important role in determining the quality of housing. Economic barriers, cultural differences, and discrimination by landlords and real estate agents reinforce racial and ethnic segregation in urban housing. Prospective tenants who are Black document discriminatory experiences with landlords during the rental application process, such as harassment from landlords or refusing to rent to certain ethnic groups. This discrimination often leaves them with only poor-quality housing options.

A report from the Ontario Human Rights Commission found that “people of African descent have difficulty finding housing because landlords believe they are criminals or have too many children.” (pg. 1) Stereotypes like these are common experiences for Black folks who rent in Ontario; however, these complaints are rarely heard on a large scale because Canada does not collect race-based data. Race-based data could play an important role in assessing and identifying the inconsistencies within housing policies and practices across the country that affect Black, Indigenous, and other racialized people. Discrimination is not only about overt acts of racism but also includes ignoring the presence of inequalities and discriminatory practices. Not collecting race-based data, for example, makes it difficult to show the extent of the discrimination facing renters of colour and so makes it harder for Black and Indigenous advocates who are trying to make policy and practice changes. The limited data we do have shows that even though household income levels have risen since the 1970s, individuals in low-income neighbourhoods still earn below-average income. As income levels increase in certain neighbourhoods, the percentage of immigrants in that same neighbourhood decreases, and so does the likelihood of those residents being people of colour. 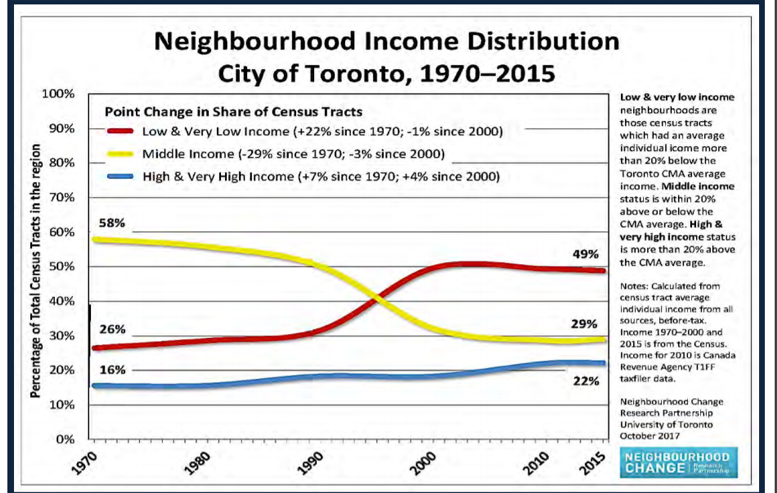 In a multi-ethnic country like Canada, building neighbourhoods that are rich in diversity should be something city planners and members of the public see as an asset. Newcomers to Canada face many housing barriers, such as the cost of housing, lack of information about the housing market, and language barriers. Housing unaffordability comes from extremely low vacancy rates and an inadequate supply of social housing and rent-geared-to-income housing. For example, rent in the Greater Toronto Area for a one-bedroom apartment has increased 143% from 1990 to 2019. Newcomers looking for housing are among the hardest hit by this devastating housing landscape. Particularly, when finding affordable housing, transparency in the application process can be challenging to navigate. Many newcomers are unaware of their housing rights and rarely have connections to community advocates when newly immigrating. This can be partly attributed to the fact that many refugees come to Canada fleeing war or political disruption and so can be hesitant to reach out for formal support or governmental assistance.

When looking at how racialized people are policed in public or subsidized housing, it is imperative that we first understand how public housing is perceived by society and why people live in public housing. First, an increase in income disparity globally and political and civil unrest from the early 1990s to the mid-2000s may account for an influx of immigration from African, South Asian, and Middle Eastern nations. Many immigrants at this time found that their qualifications were not recognized in Canada or that their professional skills were not transferable. The presence of institutionalized racism in the labour market left many immigrants to settle in ethnic enclaves or public housing. Racist and xenophobic attitudes towards immigrants led to negative stereotyping of public housing. One ongoing result of this prejudice is an over-surveillance of low-income neighbourhoods by law enforcement agencies. Whether it be racial profiling, carding, or heavy police presence, enforcement in these neighbourhoods perpetuates attitudes associated with containment and creates invisible boundaries between public housing and other types of housing. Overall, these practices attempt to legitimize surveillance of the surrounding community and the idea that public housing is dangerous, and the people living in it need to be contained.

The increased policing and surveillance of communities of colour can be attributed to not only the racist and xenophobic attitudes that are embedded in many Canadian systems but a very Euro-centric understanding of housing and the use of public spaces. Norms surrounding unit layouts and housing designs reflect a preference for scattering people and different activities within the home, creating non-communal living patterns. Culturally-appropriate housing is relevant because it focuses on the specific cultural needs of a distinct cultural group. By considering culturally sensitive housing, housing providers can support practices that define an individual’s or a family's cultural identity. An example of this in practice is the design of two-bedroom duplexes in Nunavik, Quebec. The Nunavimmiut community and Quebec’s housing agency collaborated to create housing that embraces cultural responsiveness and empowerment for Nunavik residents. Features like a reverse entryway to face the sun and homes built to preserve permafrost demonstrated how culturally appropriate design can be implemented to serve the community and promote cultural empowerment.

By investing in the expansion of interior and exterior designs, cultural practices like religious ceremonies and cultural gatherings are encouraged and nurtured, resulting in newcomers or racialized groups feeling welcomed and safe in their housing. Designs informed by culturally-appropriate housing go beyond decorations or murals and focus on factors such as family size and broader ideas around how public spaces are used. They encourage the continuation of cultural practices and festivities rather than invoke a sense of shame, displacement, or assimilation.

LISTEN: A brand new course at Wilfrid Laurier University is taking closer look at how homelessness and the criminal justice system intertwine. Amira Springer, fourth year criminology and human rights student focused her research on how to dismantle racial discrimination in the homelessness and housing sector.