An adequate supply of safe, affordable and appropriate housing is a prerequisite to truly ending homelessness in the long term. This includes ensuring that people who are chronically and episodically homeless are prioritized and that systems are in place to enable such persons to receive housing and supports through Housing First programs. In a tight housing market, implementing a Housing First agenda becomes that much more challenging. It is also important to address the supply of affordable housing, in order to broaden access for other priority populations, including women fleeing violence, Indigenous Peoples, families, seniors and youth, for instance.

Ultimately, addressing Canada’s housing crisis comes down to money, which then begs the question about our national priorities.

Canadian homeowners enjoy over $8.6 billion in annual tax and other benefits. This kind of investment in home ownership is important because it benefits millions of middle-income households.

Spending on affordable housing for Canada’s poorest households, however, is less than one quarter of that invested in homeownership at approximately $2.1 billion per year and has declined quite dramatically over the past 25 years.

Ironically, it costs more to ignore our housing problem than it would to fix it. Consider the estimate that homelessness alone costs the Canadian economy over $7 billion per year. While the Government of Canada invests $119 million annually to address homelessness through the Homelessness Partnering Strategy (provinces and municipalities also invest), this is not sufficient to address the problem and as a result has not led to a noticeable reduction in homelessness.

By not investing adequately in housing for the poorest Canadians, health care, justice and other taxpayer-funded costs increase.

We can do things differently. In the State of Homelessness in Canada 2014, we propose a robust housing investment strategy that would cost the economy much less than the current costs of homelessness. The key elements of our strategy include the following proposals: 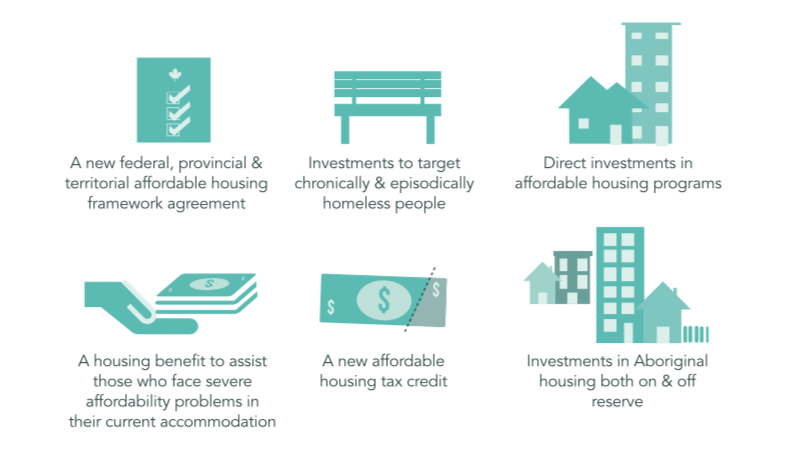 What will this cost?

Our proposed investment in affordable housing represents an increase in annual federal spending, from the projected commitments of $2.019 billion to $3.752 billion in 2015/16 with a total investment of $44 billion over ten years. These proposals have been carefully costed, drawing from the work of Jane Londerville and Marion Steele and the Canadian Housing and Renewal Association.

While this significantly increases the current federal investment, we feel that in addition to it being the right thing to do, it is also something we can afford to do. Over the past 25 years, federal spending on low-income affordable housing (on a per capita basis) dropped from over $115 annually, to slightly more than $60 (adjusted to 2013 dollars). Our proposals would raise the per capita investment to approximately $106 per Canadian annually, or $2.04 a week (currently per capita spending amounts to $1.16/week). While this may seem like a significant increase over previous levels, it is still less than what we were paying in 1989. Additionally, it is necessary to address the accumulated affordable housing deficit built up over the past 25 years. Moreover, we propose that Canadians spend only an additional 88 cents per week to contribute to a realistic solution to homelessness and to the affordable housing crisis. To be clear, this proposal will not completely end homelessness in Canada, but it will dramatically reduce chronic and episodic homelessness.

What will be the outcome of this investment?

For years we have been investing in a response to homelessness that, while meeting the immediate needs of people in crisis, has arguably had no impact in reducing the scale and scope of the problem. Our proposal will contribute to an end to chronic homelessness and reduce the likelihood that many others will fall into homelessness in the future.