Indigenous Peoples is a collective term to encompass the diversity of cultures within First Nations, Inuit and Métis experiences. First Nations refers to persons who identify as such and who may or may not be federally registered under that title in the Indian Act. According to the Assembly of First Nations, the First Nations population represents over 50 distinct nations and language groups and is made up of 634 First Nations communities (or ‘reserves’). Inuit people are descended from the ancient Thule people, and have occupied parts of Canada’s northernmost regions thousands of years before European arrival. Métis people are descendants of mixed Indigenous and European ancestry have their own culture, language (Michif), traditional homeland (the Métis Nation Homeland includes Manitoba, Saskatchewan and Alberta, parts of Ontario, British Columbia, the Northwest Territories and the Northern United States) and a sense of nationhood.

Urban Indigenous Peoples experience homelessness at a disproportionate rate and make up a significant percentage of the homeless populations in cities. According to Patrick (2014) “Some sources have suggested that Indigenous homelessness in major urban areas ranges from 20-50% of the total homeless population, while others have reported that the range may be much wider – from 11 to 96%.”

In fact, research by Belanger et al (2013) found that 1 in 15 Indigenous People in urban centres are homeless compared to 1 in 128 for the general population. This means that Urban Indigenous Peoples are 8 times more likely to experience homelessness.

Housing conditions on reserves and in Metis and Inuit communities are often sub-standard leading some researchers and Indigenous activists to state that on-reserve housing should also be considered part of homelessness.

Homelessness amongst Indigenous Peoples can be traced back to historical trauma, oppression, racism and discrimination. It can be argued that it should be considered as a consequence of colonization and exploitation resulting from the European conquest of North America. Significant abuse and cultural trauma occurred through the use of residential schools to house and educate Indigenous children. Furthermore, the 60s Scoop – which took Indigenous children and placed them in white foster homes within the child welfare system – has led to unstable families and homes. Many of the personal issues (including familial dysfunction, substance use, addictions, health issues, community violence) faced by Indigenous Peoples and that act as contributors to homelessness can be directly linked to various types of historical trauma.  Structural issues can include transitions from reserves to urban living, racism, landlord discrimination, low levels of education and unemployment.

As a result, research has shown that Indigenous Peoples experience lower levels of education, poorer health, higher rates of unemployment and lower income levels compared to non-Indigenous people. There are also serious social issues stemming from the historical trauma including high incarceration rates and high suicides rates amongst youth. 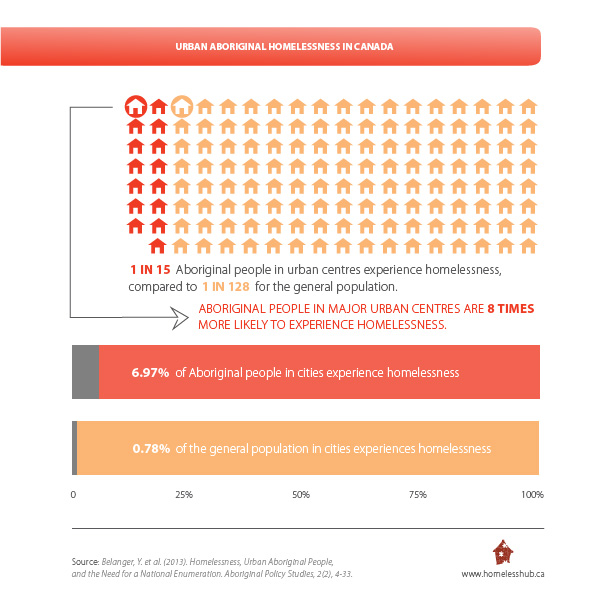