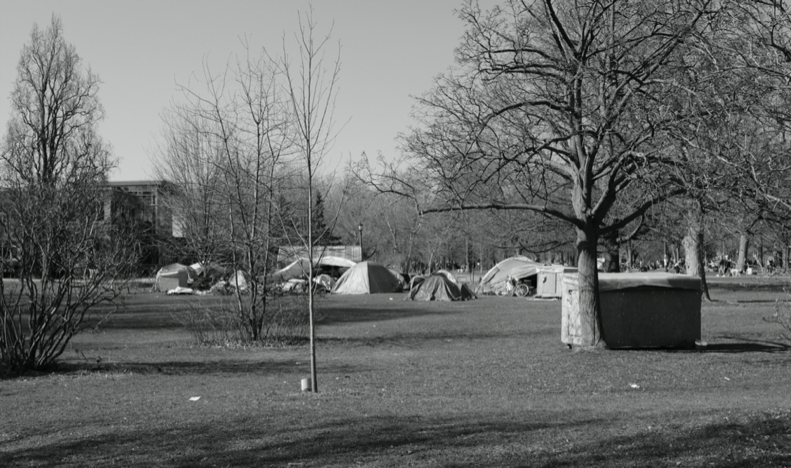 For too long, policymakers have not treated the issue of homelessness with enough weight. It is often pushed aside in favour of more pro-growth agendas. For the most part, what we see today as “modern” mass homelessness has come from the rise of neoliberal policies that have led to a social housing crisis. Historically, before the millennium, efforts to bring the public’s attention to the issue of homelessness have not been a priority. Also, policies in the 1990s were not prevention focused and therefore allowed homelessness to become a social issue. What made the problem worse was the myths spread through the media about what causes someone to become homeless.

In Canada and the US, it seems to be safe to point to the rise of Reaganism and the Thatcherism era in the early 1980s when the ﻿neoliberal policies and consequent institutional realignments set the precedents for mass homelessness surfacing only a decade later. Coinciding with the dismantling of the welfare state, neoliberal and market-driven approaches to social housing were deemed as the dominant solution to providing affordable housing. With this came a political rhetoric arguing for the criminalization of the homeless as this population has often been associated with quasi-economic activities such as panhandling, squeegeeing, or sleeping in public spaces, which further stigmatize them as social outcasts. However, such a politically charged mentality made it clear that the state did not have the capacity to address mass homelessness without resorting to punitive measures and criminalizing the homeless.

In the 1990s, the Government of Canada cut their investment in affordable housing and introduced tax incentives to support home ownership. This decision combined with the private sector’s role in housing have largely led to the rise of mass homelessness. The State of Homelessness in Canada 2014 reported that in 1982, federal, provincial, and municipal governments funded 20,450 new social housing units, however, by 1995, that number drastically plummeted to around 1,000 units. The report indicated that while Canada’s population has increased by 30% since the early 1990s, national investments in housing have decreased by over 46%, translating to only $60 per capita by 2013, adjusting for inflation.

Amidst such a political and economic background, the issue of homelessness is plagued with the stigmatization of the people experiencing homelessness that has long permeated the public’s general preconception, one that views them as a belligerent, delinquent part of society with dysfunctional families. Receiving a groundswell of support from policymakers, this view stemmed from the growing concerns over the increasing pace of modern mass homelessness with high visibility on the streets. The people experiencing homelessness were framed, within the public safety discourse, as “Folk Devils” that caused a moral panic in the society where the only conceivable way to deal with them was to enact laws aiming to criminalize them. For instance, The Ontario Safe Streets Act was passed in 1999, although, as the report: Can I See Your ID? The Policing of Youth Homelessness in Toronto demonstrated, it proved counter-productive and raised many questions regarding its efficacy and social implications.

As disclosed in Canada Speaks, a report published by the Salvation Army in 2011, more than one-third of Canadians are scared of homeless people and almost 40% of Canadians believe that homelessness is a lifestyle deliberately chosen by folks experiencing homelessness. This long-standing, widely held belief is hard to get rid of. This belief is heightened by the public safety concerns expressed by the media which frame homelessness as a derogatory term associated with a range of socially stigmatized characteristics including crime, substance use, and mental disorders, and is rarely discussed with any forward-looking image. Even the Saint of Fort Washington had a hard time exposing the common misconceptions about homelessness. It did, however, illustrate the striking realities of what it feels like to be homeless where the so-called social safety net has failed the people experiencing homelessness, stripping them of nearly all their rights.

However, homelessness is not an experience that is limited to adults. In the Canadian context, the problem of youth homelessness has gained much traction, as youth tend to have different needs and characteristics that differ from adults. A report published in 2014 by the Canadian Observatory on Homelessness brought attention to the critical divide between policy and practice in assisting vulnerable youth between the ages of 13 and 24 who are unable to acquire a decent, stable, and safe place to live. The majority of youth have not yet fully developed the personal and social skills necessary to lead an adult life, as they often find themselves relying on parents or caregivers for their basic needs. The Without a Home: The National Youth Homelessness Survey revealed the complex and multi-faceted pathways into homelessness for youth. It identified housing instability, involvement with child protection services, and challenges in school as some of the common pathways into homelessness for young people. What is more troubling is that according to this report, 40% of the youth surveyed first experienced living on the street before the age of 16, a critical age milestone for many provinces in Canada to even be qualified for intervention programs and support services. While pathways into youth homelessness are understudied, there is a growing stream of research and practice initiated by the COH that aims to fill such a gap in knowledge and action.

With political and economic uncertainties exacerbated by the Covid-19 pandemic, one might ask what can be done to destigmatize homelessness and put an end to it. To begin with, undoing decades of shrinking funding that have taken their toll on the provision of affordable housing seems to be one politically conscious approach to stable housing. Yet, even with a renewed faith in affordable housing, remedying the already entangled structures in housing policies, while firmly embedded as a commitment to future generations, requires a long period of time as they are resistant to change and more responsive to market forces rather than political wills. For another, until policy shifts to investing more in affordable housing, we can start by raising the level of awareness and public education through knowledge mobilization.

There is a grain of hope as we move forward to overcome the legacies of stigma attached to homelessness, which have pervaded the public’s perception making it far more challenging to debunk. This is because there are people who understand the realities of homelessness and are committed to reducing the stigma and humanizing this population. For example, a homeowner and activist in Salt Lake City invited people experiencing homelessness to camp in his front yard. This action can largely be seen as a destigmatizing attempt that embraces a sensitive understanding of people experiencing homelessness, long subjected to penalization and harsh, often taken-for-granted, policing.

Collectively, we need to push our optimism forward to bring a new way of thinking that can mark the beginning of the shift to focusing the public discourse on ending homelessness, in particular among youth whose voices are often marginalized. Giving youth experiencing homelessness a voice underlies how far we have come in pushing the possibility of ending homelessness by an all-promising approach to prevention. The COH’s What Would It Take? is a response grounded in the recognition that youth voices should be amplified and that those insights could shift policy interventions from merely an ad-hoc approach that responds after the problem has occurred to one with a shared agenda pivoting to prevention. As one youth succinctly reiterated in this report what could underpin the basis of such a preventative approach is to mobilize and engage the public to raise their level of awareness to “change the way the public views [homelessness]”.