What is the Ontario Safe Streets Act?

The SSA came into effect in 2000 in response to the growing number of visibly homeless individuals in cities across the province during the 1990s. The SSA is designed to address panhandling, squeegeeing and other forms of solicitation undertaken in an “aggressive manner … a manner that is likely to cause a reasonable person to fear for their safety and security”.  Unfortunately, the language of the act is rather vague, giving law enforcement officials broad discretion in its application.  Moreover, suggesting enforcement is justified if it causes a person to be fearful can play to prejudices rather than real concerns.  The law, while not explicitly mentioning people who are homeless, is clearly intended to target people of that status, and was framed based on similar legislation from the United States that had the intention of criminalizing homelessness, or the activities that people who experience homelessness engage in as a means of survival. 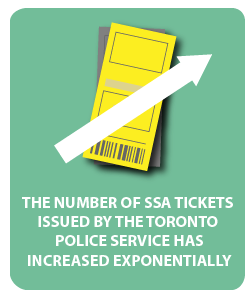 People who are homeless do not choose to be homeless. The research evidence indicates that a lack of affordable housing, combined with the inadequacy of necessary supports for those dealing with health, mental health, disability, violence and addictions issues means that many people become homeless.  Moreover, many are forced to inhabit public spaces to meet basic needs such as sleep and income generation. The way to deal with these social and economic issues is to ensure that people have access to safe and affordable housing, as well as necessary supports to maintain their housing. Using law enforcement to deal with poverty is bad policy and practice. 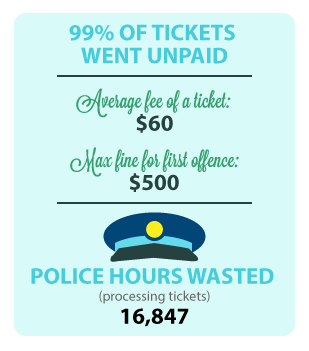 A recent study identified that the number of SSA tickets issued in Toronto in 2009 was 13,023, while the total number over eleven years (2000-2010) was 67,388. The total value of the tickets in 2009 was minimally $781,380, and over eleven years more than four million dollars ($4,043,280). This is a large financial burden placed upon homeless people living in extreme poverty. Many individuals, over time, accumulate hundreds and even thousands of dollars in fines that they are unable to pay. Involvement in the Criminal Justice System makes it even more challenging for homeless individuals to engage in education, training and/or the labour market. Furthermore, convictions for panhandling count against your driving record so the Act makes it harder for homeless people to find jobs, keeping them on the street longer.  And when jail is imposed for panhandling, people can lose the housing they do have and be forced back onto the street, actually increasing homelessness. Homeless people panhandle for small change because they have no money.  So why would we give people in this situation a fine? The SSA calls for fines of up to $500 for a first offence, and for imprisonment up to 6 months plus $1000 for any subsequent offence. People who are sentenced to more than 30 days in jail lose any social assistance they would normally receive for housing and can be evicted. This way people who have housing are forced back onto the street.

Panhandling and squeegeeing have been on the decline for a decade, yet the number of tickets issued in Toronto continues to rise Two significant pieces of research, including one by the City of Toronto, show that incidences of panhandling and squeegeeing have been declining over the past decade. Yet the number of tickets issued continues to rise. This suggests that this ticketing has more to do with the visibility and status of people who experience homelessness, rather than their infractions.

The Safe Streets Act does not actually address aggressive solicitation

A review of SSA tickets issued by the Toronto Police Services between 2004-2010 shows that 20% of tickets issued were for “aggressive solicitation,” while the remaining 80% of tickets were for non-aggressive acts that have been criminalized under the SSA. This suggests that despite its stated purpose, the SSA is not actually being implemented to address aggressive panhandling and soliciting. 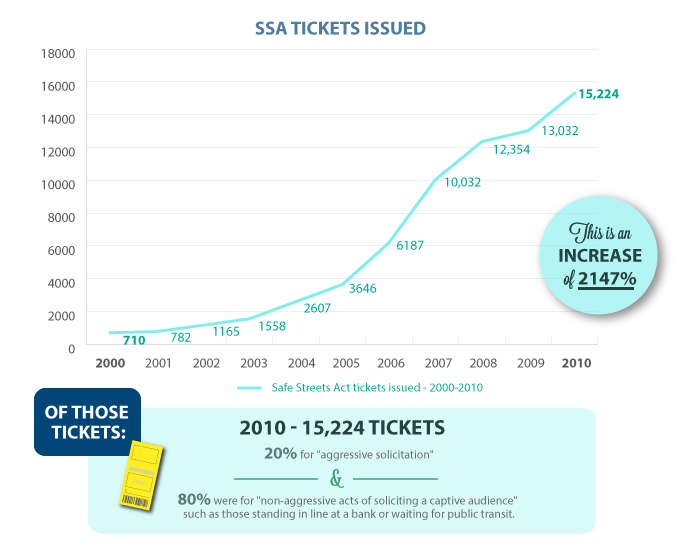 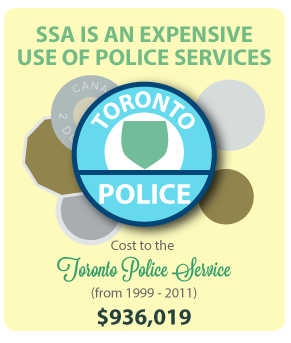 The SSA is expensive to implement. Research suggests that implementing the SSA cost Toronto Police Services $936,019 between 2000-2010. The fines imposed for panhandling are almost never collected (only $8,086.56 in fines were paid over that same period), but taxpayers are still paying for the courtroom, the Justice of the Peace, the testifying police officer and the prosecutor to have the fines imposed.

In announcing the Safe Streets Act in 1999, the government of the day proclaimed:  “Our government believes that all people in Ontario have the right to drive on the road, walk down the street or go to public places without being or feeling intimidated. They must be able to carry out their daily activities without fear.  When they are not able to do so, it is time for government to act”. While at face value, this may seem to be a worthy sentiment, in reality it is a very flawed approach to criminal justice.  If some members of the public ‘fear’ others because of their skin colour, the fact they look different, wear different clothes, are visibly poor or are young, it is not incumbent upon government to enact laws or enforcement strategies that target such people. This is bad policy and practice that infringes on the rights of marginalized people, and the most vulnerable members of our society.

What is the Evidence?

To find out more about the criminalization of homelessness and the Ontario Safe Streets Act, check out these resources: