The literature examining the relationship between homeless individuals and companion animals is scarce. To date there are only five published studies, none of which explore this issue within a Canadian context or from the perspectives of women living in homeless shelters. The benefits of companion animals with respect to enhancing the psychological and physiological well-being of their owners have been well documented. This paper examines the nature of animal caretaking among female, homeless shelter residents in Canada. Qualitative interviews were conducted with 51 women from homeless shelters located in six urban centers across Canada (Halifax, Ottawa, Toronto, Montreal, Calgary, and Vancouver) and two key informant interviews with homeless shelter administrators who facilitated space for animal companions. The interviews were transcribed verbatim and analyzed using content analysis techniques. Homeless women described being comforted by companion animals and the pain of being forced to relinquish them. Most pet owners reported having to surrender a pet. Eight themes emerged regarding the role animals played in the lives of homeless women: (a) providing companionship, (b) unconditional acceptance, (c) providing comfort, (d) providing a sense of responsibility, (e) the health and therapeutic values of companion animals, (f) providing a sense of safety, (g) loss, as well as (h) empathy towards the homeless women sharing shelter space who may not share the affinity for animals or may have health consequences such as allergies. The majority of women supported shelter inclusion of companion animals, many suggesting a designated space for the animals that would accommodate the needs of those shelter residents who are allergic to, or fearful of animals, for example. Vulnerable women who are homeless recognize the therapeutic value of companion animals. Homeless shelters should consider the need to provide space to accommodate the animal companions of homeless individuals.

Homeless Women's Voices on Incorporating Companion Animals into Shelter Services was published in the Anthrozoos: A Multidisciplinary Journal of The Interactions of People & Animals Volume 24, Issue 1 in 2011. 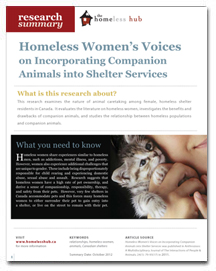