The project, Post Global, consists of images that were developed in concert with a  research paper exploring two prevailing forces, homelessness/the underhoused and the global effects of climate change. Post Global mirrors the research paper, relying heavily on the collaboration of many different individuals, spanning globally across many diverse regions. Post Global is an attempt to bring a visually impactful connection to the research taken up by Sean Kidd, Mariya Bezgrebelna and their collaborators. The title of the photo project is a slight departure from the paper, but it succinctly arrives at the key concept behind the images. The title, Post Global, is used as a primer for the viewer of the exhibition, suggesting that these issues in one region are issues that others may take up in their own nations. Though the project has only one current contributor, the initial idea relied on our global collaborators’ involvement as experts in their field. These collaborators would go collect images that reflect their concerns for homeless/underhoused individuals and the effects of climate change on these populations in their region.

With a general guideline, our collaborator was given prompts to consider while undertaking the photographic aspect of the project. Because of the nature of the project, working with homeless/underhoused individuals, we wanted to stray away from exploitative images that have been seen all too often in these types of projects. Instead we decided to focus on objects or places that could represent the issues of homelessness, without exploiting a person's likeness or story for the project's gain. The photographer, Marco Hovnanian, wrote testimonials as to how he saw these images representing the effects of climate change on the homeless population in his region. The results are a collection of 10 striking images that depict different shelter configurations in the city of São Paulo. 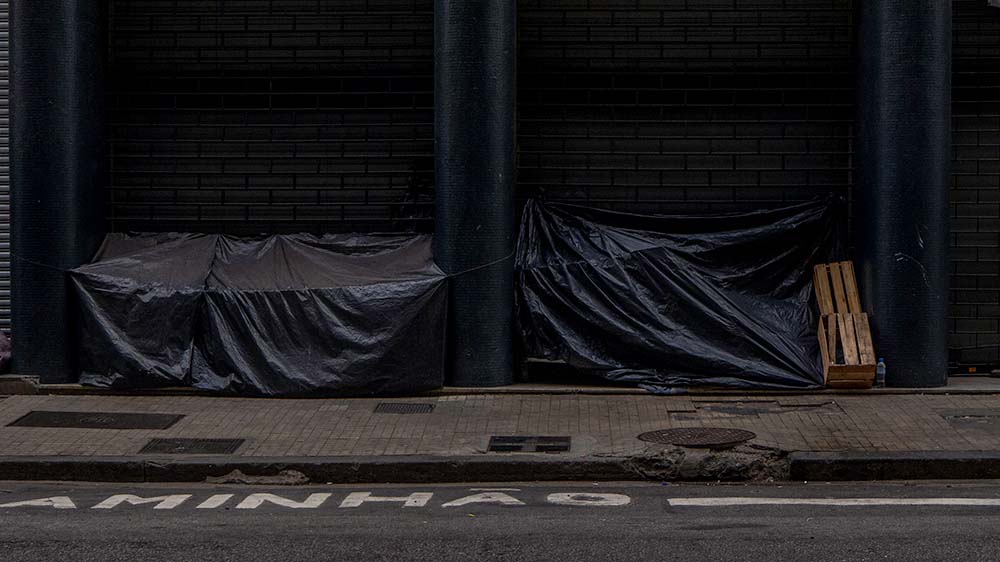 What caught my attention in this photo was the use of the structure of the buildings mixed with plastic, camouflaging itself in the urban environment. Another interesting fact is to see such structures shared between neighboring shelters, which can reveal an idea of sharing and protecting each other. 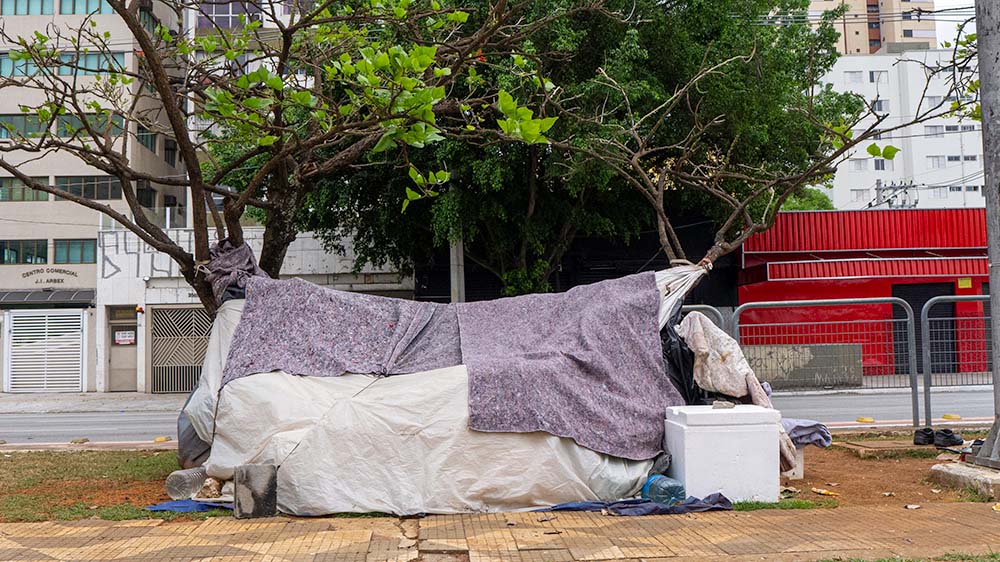 This image seeks to represent how homeless people take advantage of the tree's branches to protect themselves from the heat and create a structure for their housing. 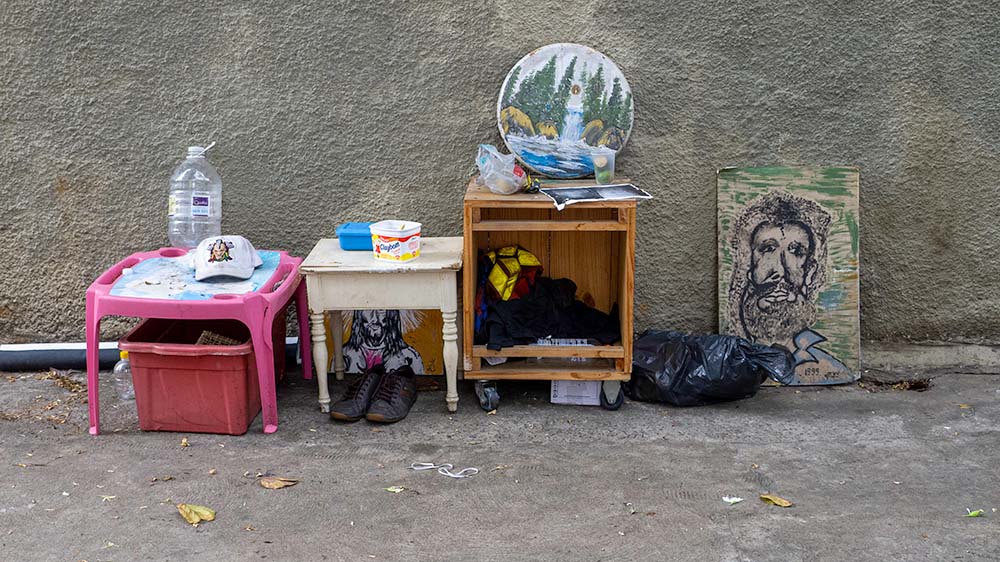 The objects presented in this image demonstrate that although homeless people live in public space, their objects are carefully organized, demonstrating their zeal for the space they inhabit. 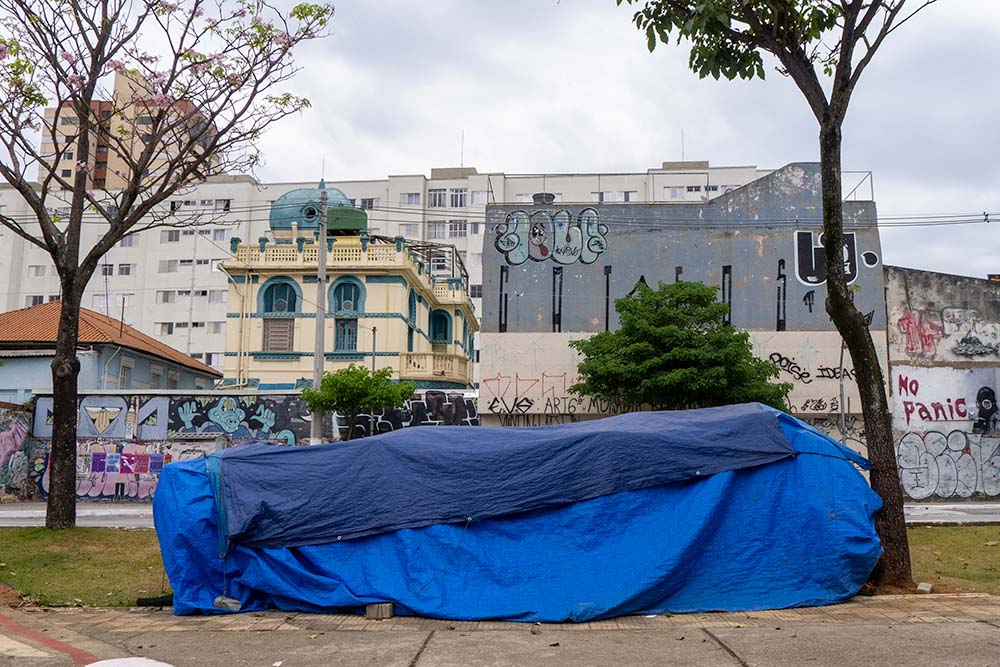 This type of shelter has thick plastic layers which for summer temperatures of up to 95 F, become extremely hot and with little air circulation. However, the plastic protects the inhabitants from heavy summer rains. 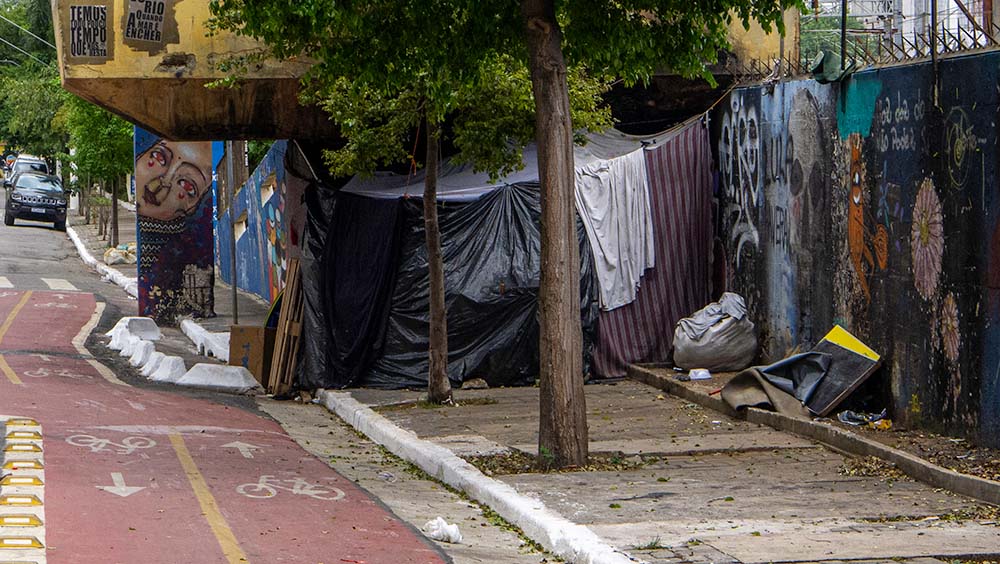 This refuge combines different lighter materials, such as plastics and thinner fabrics, and uses the structure of an overpass to protect themself from rain and sun. The space is big enough for two people to shelter. 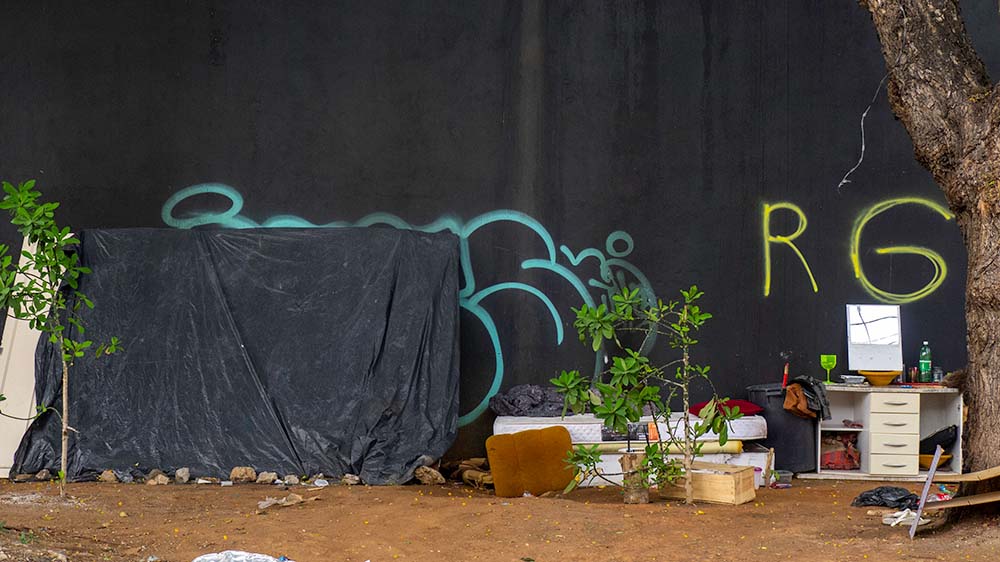 These objects are arranged in a public square in Sao Paulo. It is interesting to observe the spatial reconfiguration of objects as if they were organized in a conventional house. It is worth mentioning their tidiness of the space and care for nature. 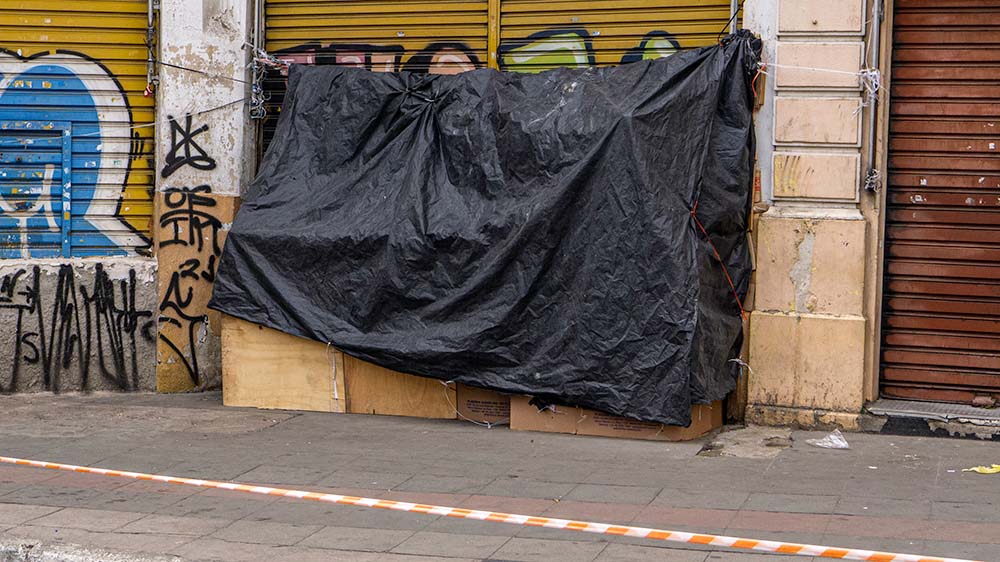 This type of arrangement with wood and plastic is quite common in the marquees of closed stores in the city centre. The eaves of these stores are used for homeless people to fit in their makeshift homes to cut wind and protect from rain. 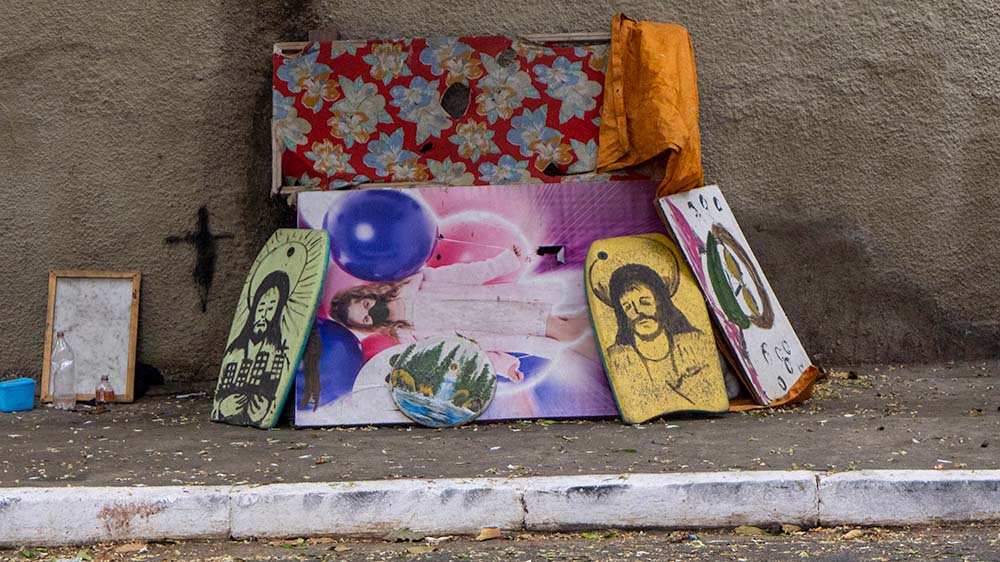 Homeless people are excavators of discarded objects in the city of São Paulo. The image shows how the composition of different types of objects can compose a playful environment of intimacy. The resident of this environment is called Hippie and all of the images are his drawings. 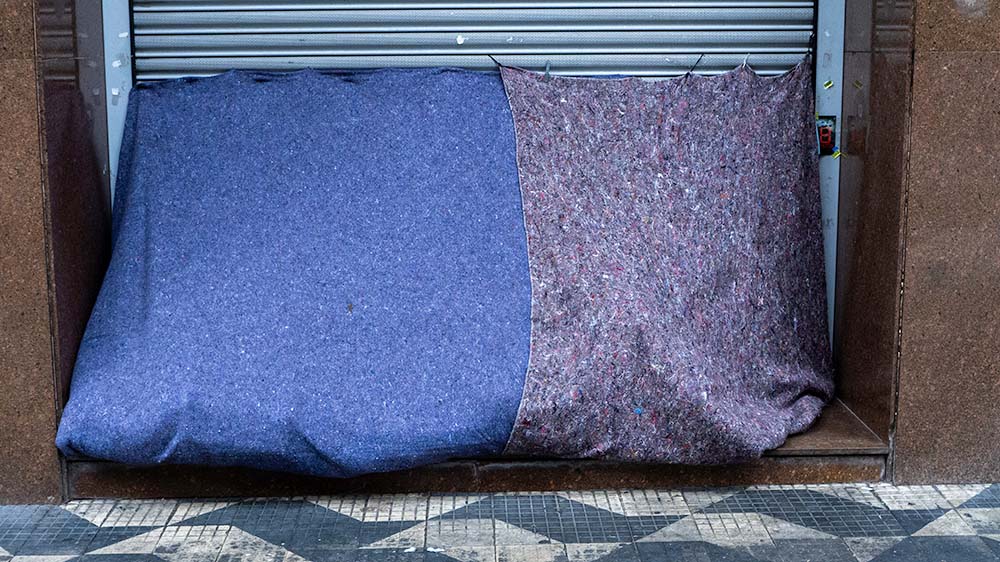 Most homeless people use these low quality blankets to wrap their bodies. In this photograph you can see how they adapted the material to create a wider space with insulation against the cold and humidity. 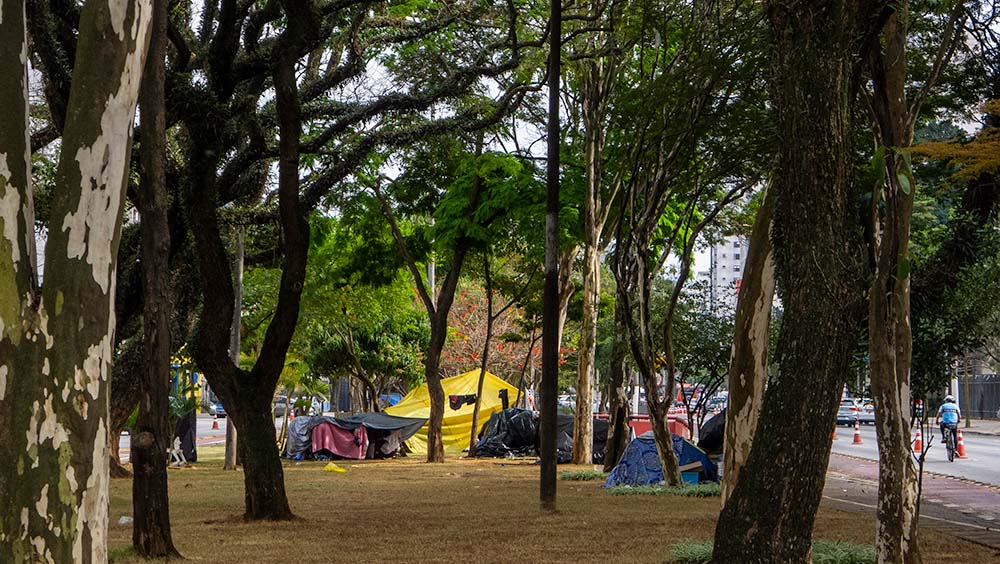 This large campground is located on one of the main avenues in Sao Paulo. The space houses mostly families with young children. These small groups seek out wooded and high-traffic areas to ask for donations to survive.