The Foster Home System Damaged Me

I was born in 1957 and in my early years I lived in a cabin with my mother and six siblings in Quesnel B.C. When I was eight years old, our mother took off and left us alone for three days. My younger siblings had no diapers and we were eating dry oatmeal. As a result, the neighbour called the Ministry of Children and Family Development (MCFD). When MCFD apprehended us and took us into their custody, we were all separated from one another except for one of my brothers and I who remained together.

I was brought up in 15 foster homes. Two of the homes I was in were reasonably okay, while in the others I suffered neglect, starvation, and physical and verbal abuse.

In the worst foster home that I was in, the foster father would touch me. When I was washing the dishes, he would come up behind me and touch my breasts and my genitals. I would tell him not to and move his hand away, but he would keep doing it. To this day I still get scared when people come up behind me.

The foster father would also sexually abuse my brother and me at night. We slept in the basement on hard cots with one sheet separating the two of us and we could hear everything that was happening to the other person. At the age of 12, I became pregnant as a result of the rapes by my foster father. When the foster father found out that I was pregnant because of him raping me, he forced my brother to have sex with me and then told the MCFD’s social worker that I was pregnant because of my brother. MCFD forced me to have an abortion.

Although that was the worst foster experience that I endured, it was certainly not unique. Sometimes foster parents would send us to bed without dinner, and then we would wait until we could sneak into the freezers at night. We hardly got any clothes, although all the foster families get clothing allowances from MCFD for us. Beatings were commonplace in a significant majority of the homes. In one foster home, I was beaten with belts and wooden sticks to my head. Today, I have a serious learning disability and I think my disability is due to the head injuries that I sustained from the beatings, compounded by Fetal Alcohol Syndrome.

My entire childhood I was too afraid to sleep. I remember vividly all the nights I would lay awake and stare at the sky, wishing I could just fly out the window. I was even scared to have showers, because it would mean being naked and vulnerable.

My brother ran away. He stole food and clothes to survive, which landed him in jail frequently. When I got older I would run away as well, and I started drinking and doing drugs. I even tried to commit suicide by jumping over a bridge, but a passerby grabbed me and MCFD put me back in the same foster home. I could never understand why MCFD would keep putting us back in the same foster homes that we had to run away from. They must have known something was wrong, but they just ignored it.

I know that many other women have similar stories. Currently in BC, over 9,271 children are living in foster care, more than half of whom are Aboriginal. As a recent PIVOT Legal Society report concluded: “The child welfare system continues to fail to address the systemic factors impacting children’s well being, such as poverty, the legacy of colonialism and the lack of social supports for single mothers. We conclude that as long as those systemic factors are ignored, B.C.’s government is not in a position to claim that it is genuinely acting in the best interest of children.”

Recently, my brother and I tried to take these issues to provincial court. The court said they could not do anything because MCFD was not legally responsible for our mistreatment, abuse, and assault. They Court said that we would have to file criminal charges against each individual foster parent. But I believe it is the government’s responsibility for ensuring we were placed in an appropriate and caring environment after apprehending us.
My entire life has been affected by my apprehension and subsequent foster home experiences. I feel damaged and inadequate. I was not taught a lot of things that children learn in a supportive family environment, like cooking, cleaning, reading, and writing. I am upset that the Court never helped me seek justice. I am furious that social workers do not actually care for children, or believe them when they tell MCFD about the negative experiences in their foster homes.Today, I am happy that I am alive. I have a good husband, three cats, a home and a life that I am grateful for. I have not done drugs or alcohol in years, and I still feel at home in the DTES. I have friends here who do not judge my disability and do not call me ‘slow’ or ‘stupid’. I am not stupid, I am a survivor.

Debbie V. is a volunteer at the Downtown Eastside Womens’ Centre and proud member of the DTES Power of Women Group.

This story is part of the Downtown Eastside Power of Women “In Our Own Voices” writing project. For more information and to read more stories, please visit the: DTES Power of Women Group Website 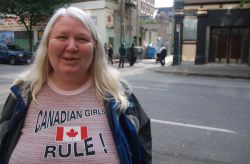