My story of being homeless

I was in the hospital in pre renal failure and when I got out I checked my email and saw I had received one from my oldest daughter telling me that she was living on the street and needed my help.

My story began in October 2006 in Innisfail, Alberta. I was in the hospital in pre renal failure and when I got out I checked my email and saw I had received one from my oldest daughter telling me that she was living on the street and needed my help. I called a friend and asked her if she was interested in buying my car and computer and explained the email I had received. She agreed to buy the car and computer and knew someone that was looking for a TV so I loaded everything in the car and she gave me 500.00 for it all. I went and purchased a plane ticket and had my friend take me to Calgary airport. I flew back to London. My cousin picked me up and took to Tillsonburg, where my daughter was.

I had little money left and went to the Salvation Army for help. They rented us a motel room for the night and told us of a place in Woodstock that might be able to help us. But my daughter was too young to stay at that shelter so the Salvation Army put us up again. Woodstock had told me about a family shelter in London so I called them and they were glad to help us and did.

We were in the shelter for about a week when the health unit in Edmonton contacted me to tell me that my blood tests show I had contracted Hepatitis C. I was shocked and my daughter was devastated as she was sure it was a death sentence for me.

We stayed at the shelter for a couple of months. In December, my youngest joined us at the shelter and we were accepted in the Hostel to Homes Program. I am glad I was a part of that and was assigned "Shannon" as my support worker. She is awesome and was someone for me and my girls to talk to. She went above and beyond her job and I am very thankful for her and what she has done.

On January 4th, 2007, me and the girls moved into a townhouse in London and the nightmare really began. It was not a nice place to live. We did not know that when we moved there but we soon found out. The stress of living there took its toll on my health and my relationship with my girls but that is another story. 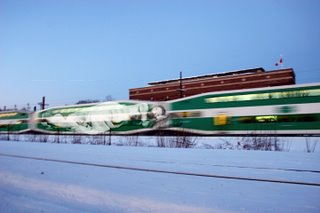